Home > Debunking myths about extended breastfeeding: “Just put it in a cup!”

Debunking myths about extended breastfeeding: “Just put it in a cup!” 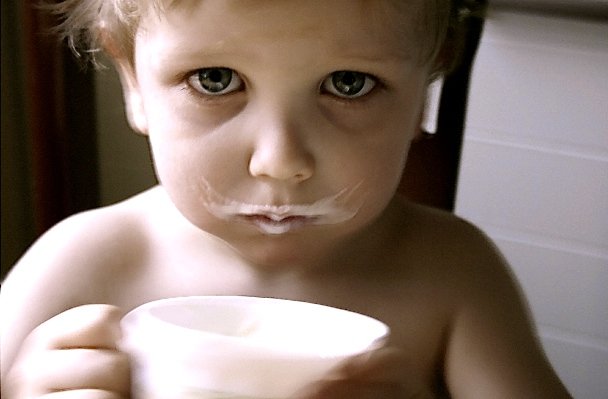 One of the common comments that I have seen made about breast-feeding past infancy, especially when the topic is preschool-aged nursers, the suggestion that if you want to give an older child breastmilk, you should just pump it and put it in a cup. I expect that the people who make this sort of comment view it as a moderate position — a peacemaking compromise. And this is a noble intention, indeed. Plus, it seems quite reasonable, and probably would work for some people.

Pumps don’t work for some women 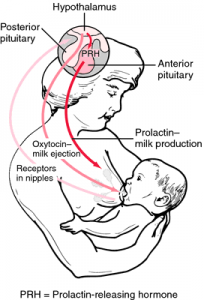 Lactation is a highly complex process that isn’t just physiological, but neurological. The stimulation of mom’s nipples, created by her baby’s equally complex sucking movements, triggers her pituitary gland to release two hormones that work together to produce (prolactin) and release (oxytocin) milk. But it’s not just the nipple stimulation; the sight, sound, and smell of her baby can help to trigger her letdown as well. Some mothers can lactate without these stimuli; some can’t. Further, she must necessarily be relaxed enough for this process to work, since cortisol and catecholamines such as adrenaline can inhibit or suppress the release of oxytocin. These processes are very difficult to reproduce with a machine, and some women simply do not respond to it, or respond adversely. For some women, only certain pumps will work, but they might be too expensive for her to buy and insurance companies can be picky about what pumps they will pay for.

It is important to also consider the fact that, even if the mother is able to express milk with a pump, she still may not produce as much milk as she would if she were expressing directly to her child. Many mothers who use pumps develop supply issues and therefore do not manage to meet their breastfeeding goals.

Asking a mom to just “pump it and put it in a cup” can be asking a lot for some people. Electric pumps run anywhere from $150 to $300, and insurance won’t always pay for it. If I were on a tight budget, I’d personally rather give my kid the best straight from the tap and put that $300 towards their  college fund.

Some babies won’t take a bottle

You never know where a mom and nursling are in their journey. She may be struggling to get her child to take a bottle, or they might not be quite ready for a cup yet. Don’t assume she hasn’t tried. Kids can be picky, especially if they have sensory issues. 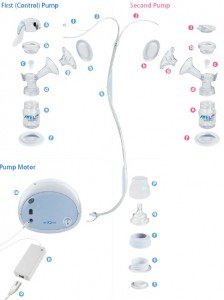 The parts of a breast pump. Looking at this makes my brain hurt.

Pumps are kind of a pain

One of the first things I want to say when someone says that you should “just pump and put it in a cup/bottle,” is have you ever even seen a pump?? These things are noisy, bulky, and have like a million tiny parts! And you have to clean and sanitize all of the little parts every day. And there are also special procedures involved with the proper storage of breast milk as well. Bless those moms who go this extra mile to provide tailor-made nutrition for their babies when they are away. But for those who don’t need to, why take those extra steps? Breastfeeding is just plain easier. And when you have a busy toddler and perhaps a baby as well, easier is better.

Guinness in the bottle is different than straight from the tap

In Dublin, it also takes five minutes to pour and is served at room temperature. And you want to go north of the river to get your pint, not in the touristy areas where it’s more expensive. #protip

The breast pump is an amazing invention that allows mothers to provide full and meaningful lives for their families. But for those who can, there are good reasons to give your child milk straight from the breast. The freezing process,  (Actually, breastmilk researcher E.A. Quinn investigated this issue this week, and concluded that this is probably a myth), can denature the proteins in the milk which are so vital to building up kiddo’s brain and body. Just like how produce and cow’s milk is healthiest fresh from the farm, so is human milk.

Human milk is still the most amazing food for human babies no matter where it comes from, though, so if you are a parent who does have to freeze breast milk make sure you know how to properly freeze and store it to retain optimal nutrition!

Moreover–and this is actually crazy fascinating–the actual composition of breastmilk is dependent upon physical contact with her nursling. Say whaat? Let me explain. A child’s immune system is not fully mature (more or less) until around age 6 or 7. (1) Therefore, while it is still maturing, the mother provides supplemental immunity via breastmilk and also helps to “train” the child’s growing immune system in what to ignore and what to attack. As a child begins to become mobile and explore his or her surroundings, they come into contact with various pathogens in his or her environment. The nursling then brings these pathogens back to mom, who “samples” them via kisses on the hands and face, and general contact. Her body takes them in through her lungs or gastrointestinal system (2) and, within hours, her body has synthesized an antibody to those pathogens that are then delivered to her child via breastfeeding.

Breastfeeding is more than nutrition

The word “breastfeeding” is a verb, after all. At so many of the talks I’ve attended at conferences, breastfeeding researchers—even the hardcore biologists—describe breastfeeding as a set of behaviors. (<— Plural! Not just a behavior, but a set of them.) I would also add to that that it should be thought of as a relationship as well. With the aid of hormonal rewards and a certain amount of what you might call conditioning, breastfeeding necessarily relaxes and refocuses the mother on her child and fosters nurturing parenting behavior. The oxytocin that is released into her bloodstream when she breastfeeds gives her a feeling of well-being and fondness for her nursling, and reinforces the bond. Oxytocin is also released in the nursling, stimulated by physical touch–especially the skin-to-skin kind. In the nursling, it serves the purpose of relaxing the child and also aids in growth and development by inhibiting stress hormones that can obstruct growth. Remember, the brain is still growing rapidly during the first six years of life. 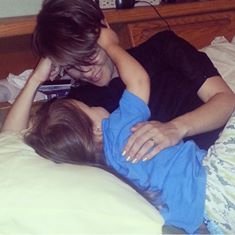 Physical touch and closeness is important for toddlers and preschoolers just like it is for infants. Photo courtesy of Suzy Dub

I have noticed that many of the same people who make this comment often also comment on how “inappropriate” it is to breastfeed an older child, or how “uncomfortable” it makes them. I would encourage anyone who feels this way to ask themselves why it makes them feel that way. I have a sneaking suspicion that these feelings might have something to do with the fact that we are most “used” to seeing breasts in a sexual context, and the older a child gets, the more “blurred” the line between child nurturing and child molestation seems to become. But I wish to impress upon the reader that breasts are secondary sexual characteristics, not genitals. And within the context of breastfeeding they are serving a reproductive function, not a sexual one. Any body part can be fetishized. The breast just happens to be a common fetish in our culture. But while the mother is being rewarded for her nurturing behavior with “feel-good” hormones, she is not becoming sexually aroused form the experience. Breastfeeding is reproductive, but not sexual.

I also wish to impress that there is nothing psychologically damaging or deviant about breastfeeding at any age. The overwhelming consensus of the medical and psychological academy is that there is no reason to believe that extended breastfeeding is, in and of itself, inherently bad for the child. In fact, much of the evidence points to it being very beneficial, both physiologically and emotionally. And there’s really no “expiration date” on that. So you might ask yourself, why deny these benefits to a child? If a mother believes she is doing something good for her child, and if the arrangement is working well for their family, why insist that they change it? If something isn’t broken, why fix it? Simply because it makes some people uncomfortable?

And in the unlikely event that you do encounter an older nursling, and this bothers you, doesn’t it seem simpler to merely look away than to insist that a parent break with their child’s routine and go to the trouble of pumping and carrying extra supplies (sippy cups, coolers, etc.) around in the name of being polite? Wouldn’t you rather lit and let live?

Breastmilk, no matter how it gets into a child–bottle, cup, or gtube–is amazing. And the breast pump is an amazing, important invention that has saved lives and made breastfeeding happen for many families for whom it might not otherwise have been possible. But there is a reason that breastmilk comes out of mammary glands. So if a mother is able to deliver it straight from the breast, she should not feel the need to deny it to her child in order to satisfy the expectations of society. The only thing that should factor into healthcare choices a parent makes for their child should be what is best for that child and their family.

1. Random fact: As I’m sure we’re all aware, defense is expensive. So the infant’s body saves money (calories) by taking it’s time developing the immune system so that more energy can be devoted to growing the brain/nervous system and skeletal/muscular systems. Isn’t evolution neat?
2. It is also widely reported on the internet that the nipple is another mechanism by which pathogens are absorbed by the mother. I have only found one primary source that supports this (http://jhl.sagepub.com/content/24/4/401.short), though it doe make physiological sense.

Aug 10, 2014Jamie
Chris Pratt Gives Us a Tour of the Guardians of the Galaxy Starship.Robin Williams and Koko: Gorillas laugh, and cry, too.