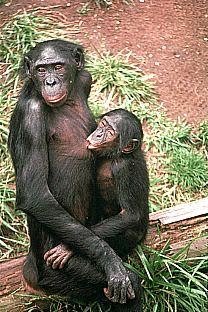 Brian and I went with the kids to see Disneynature’s Chimpanzee on opening day.  It’s really no surprise that we loved it. We knew it was going to show the story of a dominant male adopting an orphaned chimp (which was truly beautiful). What surprised me was how eloquently the documentary covered the topic of breastfeeding. Oscar, the three-year-old chimpanzee, was shown breastfeeding with his mother throughout the day. The narrator explained that Oscar eats solid food, but is not nearly to the age of weaning. It showed Oscar’s mother grooming and giving physical affection to her son while she breastfed him. It was eerily similar to when I breastfeed Aram. It will be clearly humanistic gestures like this that will move audiences to help save this species. 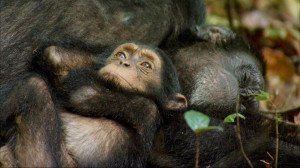 a still picture from Disneynature’s Chimpanzee

I think this movie is going to be beneficial in the fight to normalize breastfeeding. When children are exposed to positive associations with breastfeeding (even chimpanzees and other animals breastfeeding) it no doubt will help form a positive long-term connection.

This movie may also give some food for thought to adults about the normalcy of extended breastfeeding. Chimpanzees are our closest living primate relatives, sharing 98% of the same DNA sequence as a human. Chimpanzees breastfeed their young to the age of four to six years. Humans should take into account these numbers for what is a biologically normal time to wean. For example, a chimpanzee will breastfeed six times longer than they gestated. Gorillas breastfeed 6.4 times longer than gestation. That would mean the average time of weaning for a human being would be 4.5 years.

Hopefully, this information with help people realize that breastfeeding past the WHO or the CDC’s  recommended one or two years should not be the end-all decision in each family. Really, the fact that the recommendation is constantly becoming longer should make people think. Understand that breastfeeding for four years may not be necessary for survival, but it certainly should be a globally accepted option.

Bonus: During opening week, Disneynature made donations to the Jane Goodall Institute through the Disney Worldwide Conservation Fund in order to protect chimpanzees and their habitats now and into the future.