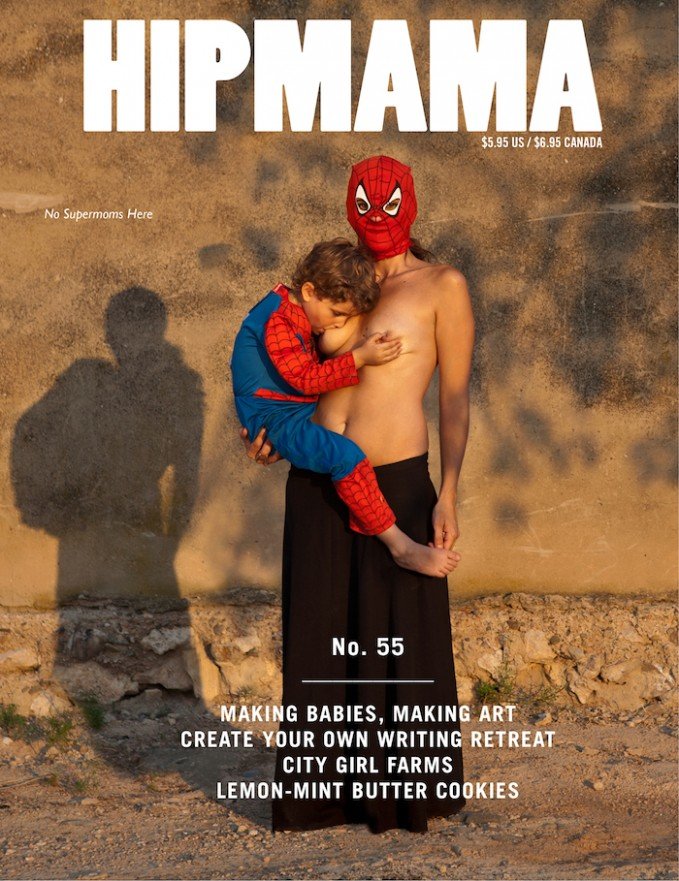 When I had my first child at 19, I lived to breastfeed in public. I’d grown up amid the Nestle boycott protesting that company’s international anti-breastfeeding campaigns, and I’d come of age in Asia and Europe, where no one gawked at the exposure of a breastfeeding woman. Back home in the United States, Americans’ squeamishness about breastfeeding struck me as both puritanical and anti-child-health. So, I fed my baby daughter whenever she got hungry, and I silently refused to move when a waitress or cafe worker asked me to. I continued my quiet nursing sit-in when the manager appeared, as they often did, and told me, “Please, uh, Ma’am, you’ll need to do that someplace else.”

My grandmother and mother rolled their eyes at my behavior. They figured I was just being a rebellious punk. And maybe that was a part of it. But two decades later I still hear from women–many of whom were kids back then–that seeing me breastfeeding in cafes all over town, or on the bus or train, had a profound impact on them and influenced their decision to breastfeed their own kids–and to do it without shame.

My daughter, Maia, is in her 20s now. She’s the art director for Hip Mama, the magazine I started edited and publishing when she was a still-nursing toddler and recently relaunched.

Maia’s the one who found artist Ana Alvarez-Errecalde’s work online and knew we should feature her in the pages of Hip Mama. “Her photographs are super striking,” Maia said. “And her statements about motherhood are powerful.”

She reached out to the Barcelona-based artist and selected “Symbiosis,” a gorgeous self-portrait photograph of Ana in partial superhero costume breastfeeding her child. 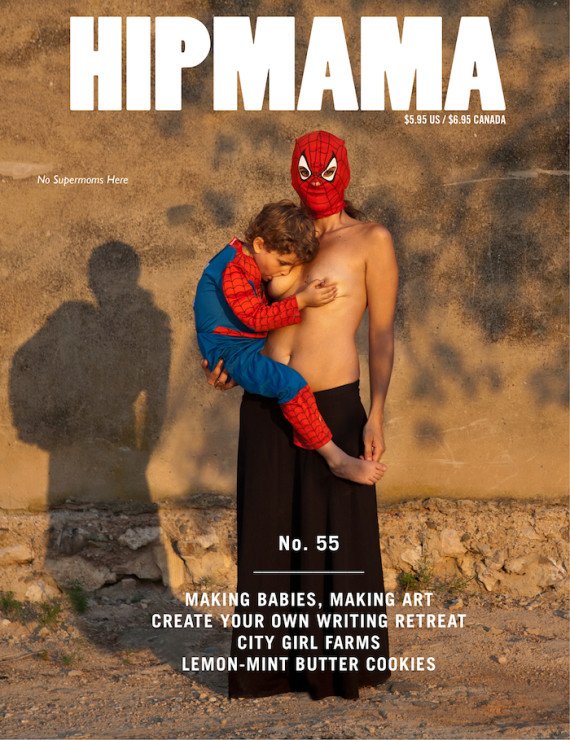 I loved the selection. I thought the image invoked the unrealistic notion of the “Supermom” who can do everything and countered it with the vulnerability of being partially naked with a small child.

I added the tagline “No Supermoms Here.”

Ana, in our interview for the magazine, said she thought of the piece as showing the symbiotic relationship between mother and child, “where each being is complete by themselves but they are reinvented and strengthened by the relationships they establish with each other.”

None of us thought of the photo as being “about” public–or extended–breastfeeding.

As I got ready to send the issue to press, I posted the cover shot on my Facebook page as a simple announcement: The beautiful issue #55 of Hip Mama would soon be a reality. This issue features stories on urban farming and milksharing, teen motherhood and the racial profiling of young kids, recipes for lemon-mint cookies and detoxifying lemon-cucumber water, and interviews with artists who are mothers, including our cover star, Ana Alvarez-Errecalde.

My social media friends and others cheered the compelling self-portrait. The cover was shared over a hundred times in less than 24 hours. But when some vendors got wind of the planned cover, they said they wouldn’t carry the image on their newsstands. Facebook censors soon joined in and began pulling the image from timelines–mine included.

Initial complaints mentioned “nudity,” but when I posted a 1976 Cosmopolitan magazine cover to my timeline, Facebook censors didn’t seem to notice the very visible nipple.

I was left to assume that it’s the breastfeeding that some people find offensive.

As Mickey Huf of Project Censored said when he shared news of the controversy, “There is no shortage of breast pics on the newsstands, on billboards, and storefronts plastered for all to behold, and they are deemed acceptable, normalized (and promoted because sex sells)…but if breasts are shown for what they are actually for–nurturing children–censors abound. America the Dumb.”

And as one distributor told me, I think quite honestly in the context of her business, “This isn’t Europe. Open breastfeeding is not okay.”

Ana suggested adding a red censorship dot to the cover, ironically drawing even more attention to the supposedly offending breasts.

My first reaction was that we didn’t need any newsstand who couldn’t handle the breastfeeding. I didn’t want to change a beautiful cover. I didn’t want even to entertain the ridiculous suggestion that it was in any way obscene. But after talking more to Ana, and to our other contributors—well, people wanted the issue out there.

We decided that printing an uncensored version for our subscribers and progressive bookstores, and a special “newsstand edition” with the dot for squeamish vendors, was better than allowing the issue to be suppressed. 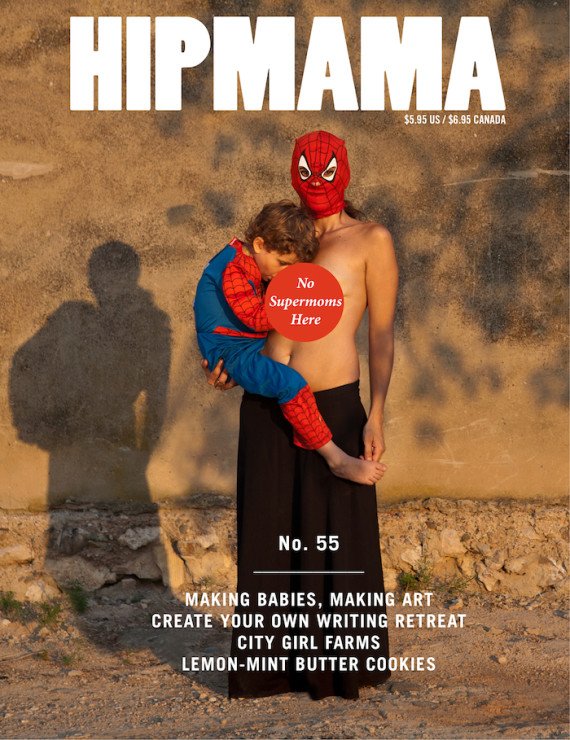 The censored image for newsstands.

In the updated issue of Hip Mama, Ana responds to the controversy saying, in part, “Violence towards women begins with the repression of sexuality, the appropriation of childbirth, the interference with all vital cycles and the creation of manipulative roles. A negated mother will also negate her body and her presence to her children, so they will all ultimately conform to our unattended, unloved, and unnourished society.”

To support Hip Mama and the uncensored artistic image we chose for the cover, subscribe to the magazine or order a single copy online at http://hipmamazine.com/subscribe  or https://www.etsy.com/shop/printlives.

The magazine will be released on Mother’s Day.

Apr 22, 2014Jamie
Child-Led Weaning: SusanFollow up Story to Breastfeeding with Leukemia: the Non-Regrets of a Bereaved Mother