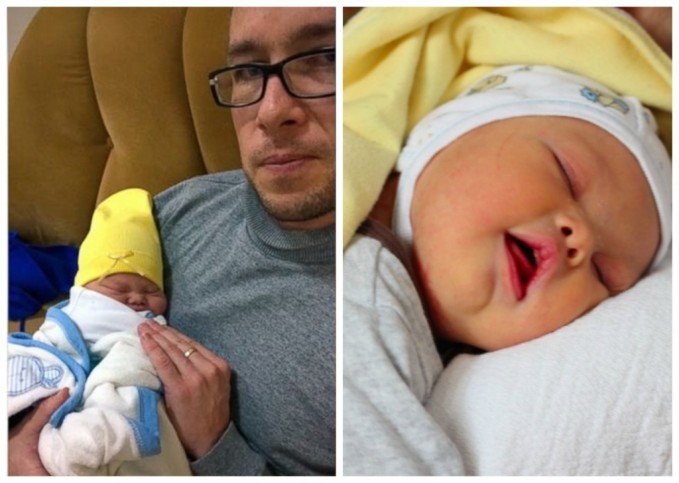 Leo was born in Armenia and according to Samuel, when Leo was born the doctors hid the child’s face in horror and wouldn’t let him see his wife or the baby. Finally they broke the news to the new father that his son was born with Down syndrome.

Samuel was shocked and concerned about his son’s health but finally was able to see baby Leo and instantly fell in love with his child.

The new father took Leo into his wife’s hospital room where absolute heartbreak ensued. Samuel’s wife wanted nothing to do with little Leo due to his medical condition. Without the consent of Samuel, she had already made arrangements to relinquish her birth rights and threatened Samuel with divorce if he didn’t do the same.

Samuel decided to challenge his wife’s threats and unfortunately, they were not empty. She filed for divorce just one week after giving birth to their son.

Despite all of the heartache in such a short period of time, Samuel seems quite optimistic about his situation. He has a new baby who he is head-over-heels in love with and all the makings of a very bright future back in his native home of New Zealand. The cherry on top of this bittersweet story is that the GoFundMe page created to help father and son move back “home,” and help Samuel take care of Leo during the first year has already exceeded its funding goal. Samuel said the additional money will be donated toward infrastructure projects in Armenia, which will help provide families of children with disabilities the resources to care for them and fight the stigma associated with congenital health conditions, rather than feeling pressured to relinquish birth rights.

Feb 6, 2015Jamie
Is eLearning All It’s Cracked Up To Be?3-Year-Old Dresses up as Wonder Woman for Her Last Day of Chemo