Home > That Time My Husband Cut My Hair with Poultry Scissors

That Time My Husband Cut My Hair with Poultry Scissors 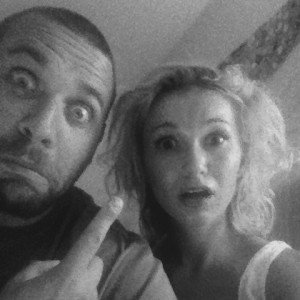 After attempting to blow-dry my hair straight (with this as the result), we decided it needed to be documented, so we took this photo. We’ll show it to our Grandkids – it will help explain why their parents turned out so weird.

I have admitted before that my choices of what (or what not) to spend our money on have been questionable.

When it comes to personal aesthetics, I am met with another grey area. There was that time I came up with a brilliant plan to wax my own eyebrows to save money. It went okay for a bit, but then I almost burned the house down with the hot wax on the stove, and I accidentally waxed half of my eyebrow off. I called my Scandinavian mom after this happened and she gave me these soothing words: “Oh don’t worry, those brows will be even in no time. Now call up daddy and thank him for his genes, if you took after me they would probably never grow back.”

Yesterday, I hit a new low. I realized my hair needed to be highlighted and trimmed. After learning the hard way (multiple times) over the years that home color would never be an option for me, I moved over to the other issue that needed to be addressed- a slight trim to cut the dead ends off.

Well, I’ve also learned over the years that cutting my own hair (and the hair of dozens of unsuspecting Barbies)  doesn’t normally lead to anything but frustration and an expensive trip to the salon (or toy store), so I knew I had to take myself out of the equation…but no one said anything about Brian.

Me: Brian, I need a little trim, do you mind?

B: I have no idea how to cut hair.

Me: Oh, it’s easy! Just cut in a straight line.

B: I think this is a bad idea, but okay…

I handed him the scissors and I felt him try to cut to no avail.

B: These are right-handed poultry scissors. (We’re both left-handed)

Me: Oh yeah, I know. Um, I tilt my hand to the side and it works better.

Brian tried again and it didn’t work. He decided to switch to his right hand.

He pulled my hair back and try to cut my hair like it was in a pony-tail. Before I could shout it was too late.

Me: I feel air on the back of my neck!

B: That is because the back is a lot shorter than the front.

Brian did his best to fix my hair. After a few inches of cutting he (kind of) got the hang of it.

B: Maybe you should go to the salon really quick and get this fixed.

Me: Eh, no that’s okay, I have scoliosis, it actually probably looks more even this way.

Do you have any hair horror stories?

May 14, 2013Jamie
Clothing Your Kids Without Sweatshops: A Giveaway!Breastfeeding Billboard Jokes About Pedophilia