Three years ago, Pitt was a beautiful, athletic, young mining engineer who took on an ultra-marathon in Western Australia. She was tragically caught in a raging bushfire during the event and although she survived, 65 percent of her body was badly burned. Not out of danger yet, she kept fighting as she spent 864 days in the hospital and underwent more than 100 surgeries.

The national attention surrounding Pitt could have gone in a way that painted her as a suffering victim, but as the media followed her, the public started gaining inspiration from her words.

Soon Pitt became a motivational speaker and author. The Australian Women’s Weekly asked her to join their judging panel for the magazine’s annual Women of the Future scholarship award. One of the panel always takes the cover, and according to the magazine’s editor-in-chief Helen McCabe, the decision to give the cover to Pitt was a no-brainer: 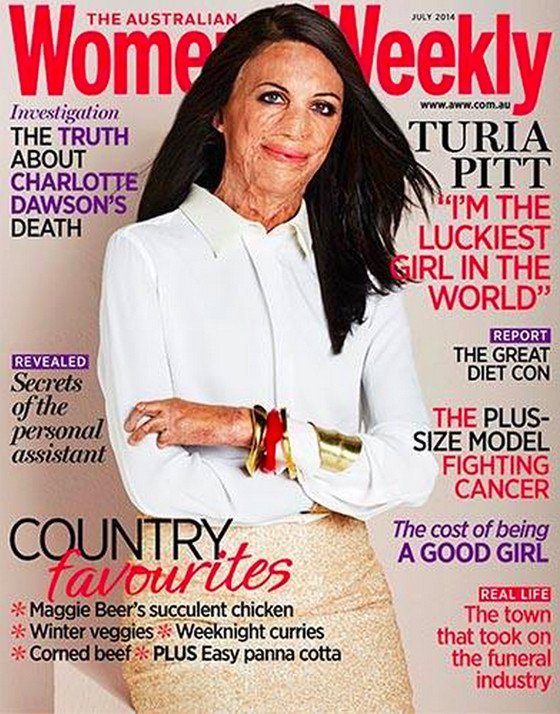 “For eighty years, the Women’s Weekly has been celebrating inspirational Australian women,” said Helen. “When Turia was photographed as part of our Women of the Future judging panel among a group of similarly impressive Australian women, it was clear from the moment she sat in front of the camera that the July cover had to belong to her.”

“Any attempt to describe the magic and beauty of Turia seems to get lost in platitudes or clichés. Yet, I have never met a more remarkable person.” –Source

When Pitt was asked about gracing the cover of the magazine, she had this to say:

“Being on the cover of The Australian Women’s Weekly is a huge honour; I feel very humbled. For me, it sends the message that confidence equals beauty. There are a lot of women out there who are so beautiful but don’t have the confidence, and that’s what gets you over the line.”

You can read more of Pitt’s story in the July issue of The Australian Women’s Weekly.