LOL no not really. I personally find babies to be so much more than just a helpless, screaming, miniature version of adults. To me, human infants represent an evolutionary marvel, and a fascinating juncture where pure biology and culture meet.

But manipulative they are, indeed–though not intentionally so. It’s more of an instinctual thing. By virtue of their helplessness, they evolved a host of behaviors that ingeniously draw you to them, make you want to protect them, feed them, care for them. And in an evolutionary context, that meant the difference between life and death.

One of those adaptations was crying. Sometimes, it seems, they won’t stop crying! If your child seems to cry excessively, I encourage you to talk to your pediatrician and rule out any underlying problems. However, sometimes no problems can be found, and we refer to that as “colic.” This doesn’t necessarily mean that there isn’t still an underlying problem, just that it that the cause is still unknown, but for the most part the baby is healthy. Hypotheses about underlying causes run the gamut from undiagnosed reflux to, more recently, problems with the microbiome.

However, it may be that nothing is physiologically wrong, and that some babies are simply more assertive in making their needs known, or have excitable neurology. Assuming there really isn’t anything physiologically wrong, it may help some parents to simply understand crying in an evolutionary, biological, and behavioral context. It may not help you stop the crying, but the understanding might help give parents peace of mind about their babies. Here are some basic principles that I like to share with parents. 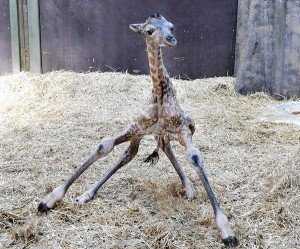 Scientists are still figuring out exactly how “immature” newborn brains can be considered to be and why, but when you compare them to other large mammals, it is clear that we are born pretty darn helpless. Giraffes, for example, are up and walking within 10 minutes after birth. (And it is adorable.) This, plus our ginormous (<— scientific terminology) brains, means that they require a tremendous investment of time and energy from caregivers in order to grow. (And don’t we know it!)

Being so helpless meant that cavebabies needed someone to be near them all of the time so that they would have protection from predation. Obviously, they can’t call out to mom or dad, so they cry. We see this in other mammalian infants as well, but ours are…particularly loud…

Crying frequently for breastmilk would have prevented lactating caregivers from wandering too far from baby. This clever adaptation ensured that babies ate often and promoted growth.

Infants have a series of proximity-based needs

Nowadays, predation is obviously not an issue anymore, but the physiology of the human infant has retained clues about our evolutionary past. Studies on breastfeeding and cosleeping have shown that physical proximity and contact helps “train” the infant’s still-growing nervous system in the business of homeostasis – regulating body temperature, heart rate, and breathing. It is for this reason that cosleeping—within the context of a breastfeeding relationship—is thought to be protective against SIDS under certain conditions. Some anthropologists will describe the mother’s body as being the environment in which the human infant evolved to live and grow in.


Excessive crying not much of a problem in hunter-gatherer societies 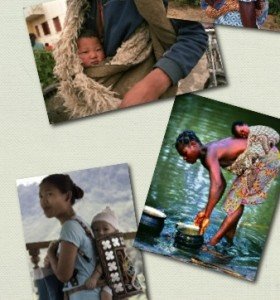 The obsession with infant sleep is a phenomenon that is mainly only found in the U.S. and the U.K. (In Italy, for example, instead of “How is your baby sleeping?” you are more likely to hear “How is your baby eating?”) Sometimes, it is helpful for Anthropologists to study hunter-gatherer cultures in order to uncover clues about how humans may have lived in the “environment of evolutionary adaptedness.” (That’s sciencespeak for “back in the day.”) Anthropolgists who studied the Kung! San of southern Africa found that the frequency of crying bouts are the same as ours, but they spend much less total time crying. The researchers noted these mothers’ “indulgent” parenting style. These infants are “worn” by their mothers, and sleep with them at night. The infant is right up on the mother, so the mother can quickly and easily tend to his needs. He regulates his own blood sugar and nutrition by breastfeeding whenever he wants. The mother’s movement lulls him to sleep whenever he’s tired.

But in the West, by use of strollers, car seats, and cribs, we have moved away from the constant contact our babies appear to have evolved to expect. It sort of isn’t surprising that some babies seemed a little, well, peeved about that! But does that mean we should all throw out our strollers and wear our babies in slings in 90 degree weather? Hahaha no. But just might help you relax a bit, with an improved understanding of that one kid you had that would never let you put him down for even. one. minute. 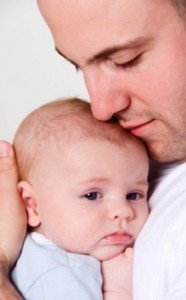 state is out of balance by making the most annoying sound possible, thereby eliciting a prompt response from caregivers. Therefore, crying should be understood as just one part of an ongoing feedback loop between baby and caregiver.

In the cavebaby brain, survival depends on this idea of “reciprocity.” The infant signals a need, and when a caring individual responds, it rewards the caregiver with reciprocating smiles and adorable cooing. As an ongoing, repeated process, it reinforces caregiving behavior of the parent or caregiver, and also teaches the baby how to communicate it’s needs efficiently. This is how parenting starts out kind of hellish and progressively gets easier in the early weeks and months. Some parents may describe reaching a kind of synchrony or “groove.” 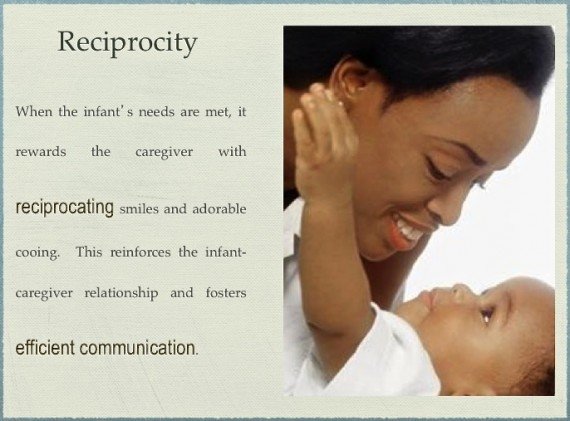 The interesting thing about human infants is that they are, for the most part, pure biology. You could take any human infant, plop it down in any culture, and it would successfully grow up as a member of that culture (barring any prejudices about skin color, etc., inherent to that culture). But there are some aspects of infant biology that are so long evolved, so deeply ingrained, that it takes a little longer for them to “get the memo” that it isn’t year 200,000 B.C.E.

Sleep and crying seem to be one of those interesting places where infant biology sometimes butts heads with Western culture. Hence the hot debates over sleep training, co-sleeping, and breastfeeding. I don’t think that anyone is suggesting that we all stop our normal lives and live as hunter-gatherers; we couldn’t do that if we tried. But I do think that the evolutionary perspective does highlight some important discussions that need to be had about public policy, personal values, and how we can—as individual parents and as a society—better meet the needs of our babies so that they can get the best possible start on life.

If you found this article interesting, or if you know someone who is expecting and are looking for a great baby shower gift, check out Our Babies Ourselves: How Biology and Culture Shape the Way We Parent, by anthropologist Meredith Small of Cornell University. It’s an easy and quick, yet fascinating read. I also think it is a unique but helpful book for new mothers, because it helps to place all of the other parenting advice they will receive in context. Much of the information for this article came from that book, as well as the works of Sarah Blaffer Hrdy, Ronald Barr, and James McKenna.

Jun 19, 2014Jamie
My Breastfeeding Journey with an ABO IncompatibilityMale Dancers Perform to Beyonce in High Heels and it is AWESOME