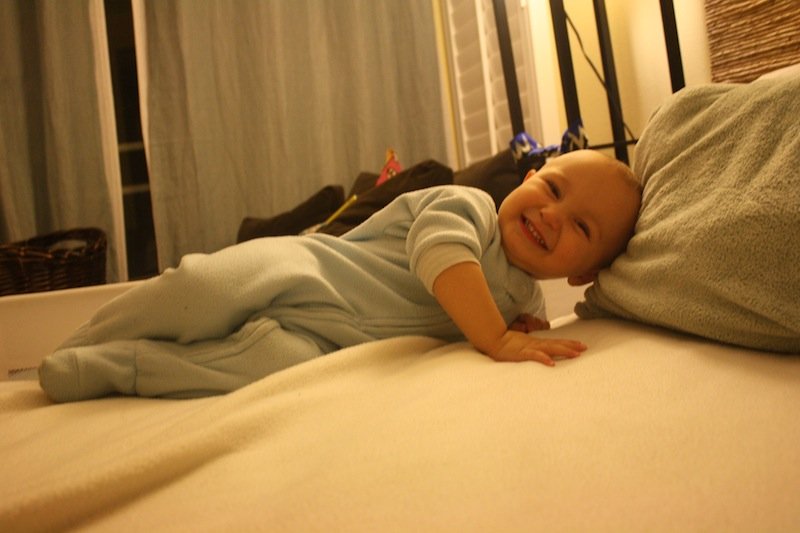 This book has stirred up a lot of emotion among mothers practicing different parenting styles.

The hot topic has been co-sleeping.

We are a co-sleeping family. I co-slept with my parents as a child, and Brian and I co-sleep with our children.

I thought co-sleeping was almost a non-issue in the US, but I was wrong. I have never heard more abhorrent comments among misinformed mothers, regarding co-sleeping.

I then discovered Milwaukee launched a very public anti-co-sleeping campaign: 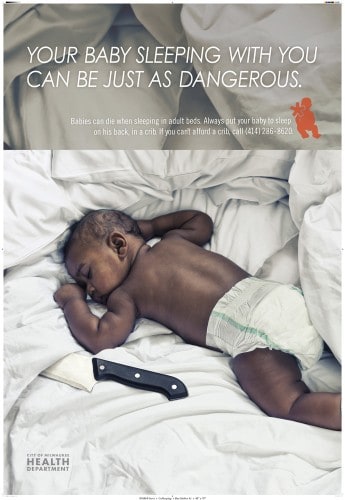 The campaign is proving not to be effective in preventing infant deaths (impaired co-sleeping has admittedly been the cause of the deaths reported, as opposed to safe/precautionary/normal co-sleeping.)

However, the propaganda will undoubtedly feed the public’s misguided view and unacceptance of co-sleeping. Thanks Milwaukee.

In light of all of this really disturbing information, I’ve decided to speak out about my co-sleeping beliefs. This is not to bash anyone who chooses not to co-sleep with their child. I would defend any mother’s right to choose the best place for their child to sleep. Whether that be in a crib up to current safety standards, or in a adult bed with parents educated in safe-cosleeping – the right choice is different for every family.

I’ve selected three co-sleeping myths that I am commonly presented with when I tell someone about our parenting practices.

You will kill your baby

The primary concern for parents considering co-sleeping is the danger that has been reported (parents rolling over on the child, child suffocating in covers, or higher likelihood of SIDS than in a crib.) Unfortunately, like all information in the media, the details are either left out, or misconstrued. (See this study.)

There are measures every parent should take to ensure the safe sleeping of their child in their bed. ( Safe Co-sleeping Habits.)

I am not suggesting everyone should co-sleep with their child. However, there are only a few instances where it is unquestionably risky for a child to share a bed with their parents:

Parents using drugs or alcohol before bed, are extremely obese, and/or suffer from certain sleep disorders, are good examples of people who put their children at risk during co-sleeping.

There has been an assumption that our species practices solitary nocturnal sleep, but in actuality that thought has been culturally derived. Anthropologists have stated for quite some time that normalcy for Homo sapiens is a social sleep environment. (The Rise of Homo sapiens: The Evolution of Modern Thinking, by Fredrick L. Coolidge and Thomas Wynn)

Co-sleeping is part of our biological and evolutionary makeup. For the past four million years, hominids have slept with their parents- causing an evolution of the infant’s sleep, breathing and arousal. There have been several studies done that have discovered mother-to-infant sleep stages intertwined throughout the night, with sensory communication constantly occurring between them. (American Journal Of Physical Anthropology, Volume 83, Pages 331-347.)

With nocturnal separation being a complete biologically unusual experience for a human infant, the studies then went on to explore the possibility of SIDS rates being lower in co-sleeping infants. And it was discovered that infant apnea was decreased by up to 60% in co-sleeping babies.

Co-sleeping does not mean your child will turn into a co-dependent adult. Obviously, during younger years there is a required dependence of a child on the mother. If a child is assured of close proximity to the mother, he or she will be more independent throughout childhood and adulthood. Studies have shown that early co-sleepers (co-sleeping beginning at infancy) showed more self-reliance and social independence than solitary sleepers. (Infant and Child Development Volume 13, pages 369-388)

From my personal experience co-sleeping with my parents, I agree completely with this study. I was the youngest of my siblings, and the only child my parents practiced attachment parenting with. My sister will joke that the reason I live five hours away from my parents and she lives five minutes away is because of my security due to co-sleeping and extended breastfeeding (she currently is practicing Attachment Parenting with all five of her kids.)

Aram is another example of an independent co-sleeper. When he was 2.5 years old, we left him for a week with my parents when we went to Hawaii. He went from never being away from us overnight (still breastfeeding, mind you) to being away from us for seven days. When the time came, my parents were shocked at how well both boys were doing. They did not cry, they knew we were gone, but had a realistic view of when we would return. When we returned, they spoke about the fantastic vacation they experienced at Grandma and Grandpa’s.

We have been away overnight countless times after this, all with the same positive results.

Co-sleeping does not allow you to be intimate with your husband.

Anyone who is implying that sex can only happen in the bedroom should be getting my sympathies, not the other way around.