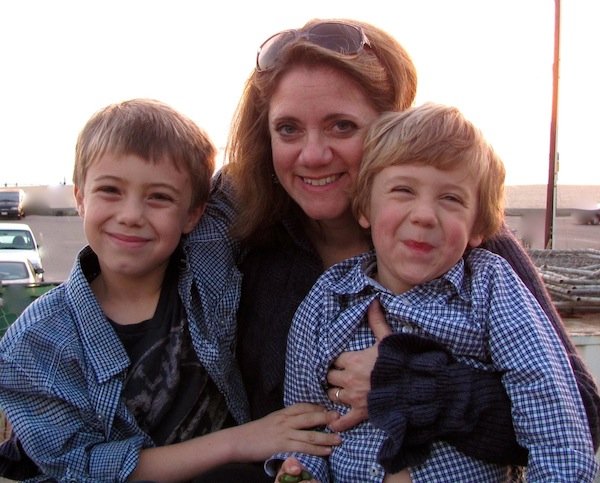 1. Tell us about your personal breastfeeding experience with your child:
When my first son was born, I knew I wanted to breastfeed – I just underestimated how much of a challenge it would be in the beginning. I probably didn’t sleep for the first five days of his life – a combination of him waking up, and me being freaked out because I couldn’t get it to “work” right. As soon as I could, I made an appointment with our local breastfeeding support center and I literally counted the hours until my appointment. When I walked into the office, I burst into tears – the culmination of all of my frustration and exhaustion.

But they gave me lots of help, and so much encouragement, and I left feeling like, “I can do this.” Within a day or two he was nursing much better, and we never looked back.

When he was four months old, I went back to work four days a week, and I pumped religiously. It was so much work. I think if I had been in a less supportive workplace I would have given up on it much sooner. By about 8 months, I stopped pumping and he started having formula while I was at work. But I kept nursing him in the morning and at night, and it was a very sweet time for both of us.

My second baby was a preemie and lived in the NICU for the first three weeks of his life. He was born too little to coordinate sucking and swallowing so he basically had to learn to eat. First they had him on a feeding tube, and then they fed him from these tiny little bottles. I pumped around the clock and ferried the bottles back and forth to the hospital. I worried that he would become a bottle baby and not be interested in nursing.

But this time I was smarter. I went straight to the breastfeeding support center as soon as he came home. (You’d think that I’d be an expert the second time around, but it was almost like I had to learn it all over again.) Again, they were a great help – and soon he wanted nothing to do with the bottles.

2. What is your view of breastfeeding in public, and why?

I’m a pretty modest person so I didn’t do it much, especially as the babies got bigger. If I needed to do it, I definitely covered myself up. But I have no problem with women doing it. It’s food for the baby.

3. What is your view of sustained breastfeeding, and why?

I nursed both of my kids until they were a little older than two, and I loved every single minute of it.

I had this preconception of a mom who did sustained breastfeeding as some sort of barefoot hippie type with naked kids clinging to her from all sides. That’s just not me. But once I started nursing, I really didn’t want to stop – it was so incredibly sweet, and the time became even sweeter as my babies turned in to toddlers. Just thinking about that time makes me all misty-eyed.

I certainly would never push it on anyone. And I wasn’t in-your-face about it; after the first year I was only nursing at home, in the early morning or at bedtime. But I would encourage new moms to tune out prejudices and keep their minds open to doing it if it feels right. For me and my little ones, it was definitely the right thing.

4.Is there anything you find unique about your breastfeeding story with your child?

5. Is there anything you wish you did differently?

I wish I hadn’t taken negative words so seriously. People would say things like, “If you nurse them to sleep, they’ll never learn to sleep on their own.” Well, I did nurse them to sleep, and they learned to sleep on their own just fine. Or people would say, “If your newborn baby gets used to drinking from a bottle, he’ll never learn to nurse.” That’s just plain untrue. Babies and kids are incredibly flexible. They can learn anything. My advice would be not to get stuck in the “never” mindset.

Also, I wish I hadn’t been so affected by the stigma against sustained nursing. I pretty much did it at home, at night and in the early mornings, but there were some people who knew I was still nursing who would tut-tut about the whole thing. I wish I could have been better at ignoring them and feeling more confident about my decisions. In the end, I really believe that the amount of time I nursed – and the point at which I weaned them  – was just right for me and both of my kids.