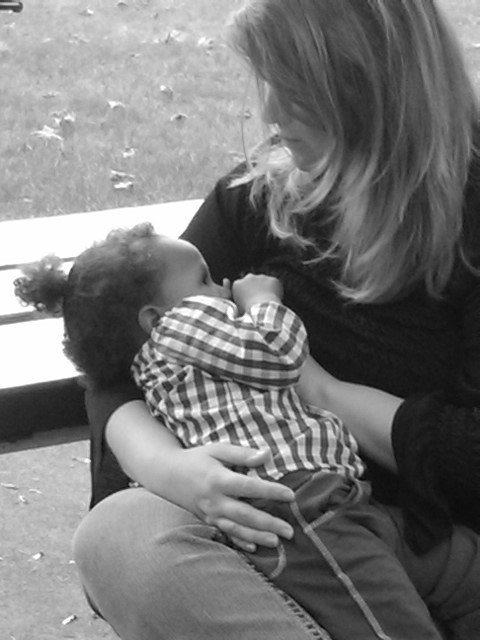 I always knew I would breastfeed my children.  When I had my first child, at the age of twenty, I had no expectations about how breastfeeding was “supposed” to go, nor were there ever thoughts about not being able to nurse.  My daughter’s birth was challenging; her latch was poor and no one offered me any help while at the hospital, despite noting on my chart that our nursing sessions were merely “fair”.  The day after we came home from the hospital my milk came in and my daughter grew increasingly lethargic, refusing to latch at all, and it was obvious her newborn jaundice was worsening.  A patient home nurse visited us, providing me with a quality breast pump and control-flow bottle. She encouraged me to offer the breast every few hours first, then to try and offer some expressed breastmilk.  I was devastated, believing that I would not be able to nurse my baby. I am incredibly grateful to that nurse; resorting to formula was never mentioned and she provided gentle encouragement.  It took a week before I was finally able to get her to latch on and nurse successfully; later K self-weaned at the age of two and a half.

My three subsequent children were born un-medicated and out of the hospital.  I noticed an amazing difference in their alertness, as well as how our initial nursing sessions went.  My boys latched on like hungry barracudas, nursing until ages two and two and a half.  With them I experienced the ease I had always expected “naturally” occurred between all moms and babies.  My last baby, a girl, followed in the footsteps of her sister, latch-wise.  We constantly had to work to get it right and it took hard work and perseverance on both of our parts.  She recently weaned three months after her third birthday, ending a cumulative ten and a half years of breastfeeding between my four children.

People need to eat.  Babies are people.  Sometimes, when I am out and about I get hungry; as such, my babies sometimes would get hungry too.  Naturally I would always nurse prior to going out to run errands in order to avoid a cranky, hungry baby screaming in the backseat of the car.  Avoiding nursing while out was not always possible, though (not that I worked to actively avoid it by any means either).  Sometimes, a growth spurt would be going on and my little one would be cluster feeding (nursing many, many times in short periods of time).  Other times, my little one would not be interested in nursing before we left out, but would become hungry during the trip.  Regardless of the reason, eating is a basic life necessity and therefor, a priority.  I have nursed using slings while walking through stores, on park benches, on blankets in the park, on pews in churches and in restaurants.  Most of the time, my babies would not allow a blanket over their heads so I would pull my top down enough so that I wasn’t flashing everyone and then proceed to nurse.  Countless times strangers have stopped to admire one of my babies nursing, not even realizing the baby was sleeping.  I remember specifically in the grocery store, a woman leaned down to get a peek, “Awwww, he’s sleeping”, she said.  Some people argue that nursing is a special intimate time and should be reserved to being in a private area because of that.  I would agree that nursing is special and a bonding experience.  At the same time, it is still “just” eating, a normal part of life.

I never imagined that I would nurse my children into toddlerhood.  When I had my first, my goal was to do it for a year.  Once she turned one, forcing her to stop did not seem the right thing to do.  She was still enjoying it just as much as she had for the past year, my milk had not suddenly lost its benefits and she was no less a baby since she hit her first birthday.  Because she was a year old, cow’s milk was not suddenly more nutritious to her than her own mother’s milk, nor did she have any desire to drink it. When she turned two, I tried to encourage her to wean, resulting in screaming battles that consisted of her crying “Help me, mama, help me!”  After a few nights of that, I gave up, allowing her to gently wean herself on her own.  I found that allowed her to do it in her own time.  There was no trauma for either of us, no tears, no engorgement.  Instead one day she politely declined my offer to nurse before going to bed and that was the end of it.  Having learned from that experience, I took the same approach with my subsequent children.  I learned how much of a benefit full term nursing can be, from providing hydration and nourishment to a sick child who refuses to eat or drink, to soothing boo-boo’s to calming a scared child during a medical procedure.

I have never adopted a child (though I would love the opportunity one day), however I fully support adoptive breastfeeding and would do so myself.  Sort of related, however, my stepdaughter had a baby six months prior to my last child being born.  When she unexpectantly needed to wean her, I began pumping extra milk for our granddaughter so she could continue to receive the benefits of breastmilk.  She still needed formula supplementation; however she was able to receive the benefits of having breastmilk in her diet until she was 18 months old and loved it.  Every baby deserves human milk.

I do not believe that my journey in nursing my children is any different than many moms out there.  I did what I felt was best for them and happened to enjoy it in the process.  It wasn’t always easy or fun.  At times I would feel frustrated or “touched out” when having a baby or toddler that would want to constantly nurse.  I have dealt with clogged ducts, soaking through shirts, reeking of sour milk, and having my nipples used as teething toys.  Despite this, there were more sweet times than not.  One of my favorite memories is sitting down to nurse my oldest one day, when she was about four months old.  My breasts were full and she was hungry.  Just as my milk began to let down she stopped, looking up at me with big brown eyes, nipple still in her mouth, milk dribbling out from her smile.  I remember thinking “this is what makes everything worth it”; it was a perfect moment.

I can’t think of anything I would have done differently.  I provided my children with the best nutritional start that I could.  In the process, my three step-children were also exposed to breastfeeding as a normal part of life and as something to not be ashamed of.  My four children all know that they were nursed, as well as regularly seeing their younger siblings being nursed.  To them it is simply the way babies are fed, something that will be carried into their lives as adults and hopefully impacting their own children.  There isn’t much more I could ask for. 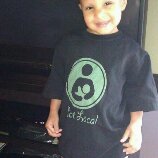 I fully believe that it is our job, as mothers, to constantly advocate for our children.  This certainly can apply to many aspects in life, but it can be hard to do sometimes.  For example, a few years ago I brought my youngest, A, to our pediatrician’s office for her DTaP.  I have always nursed my children whenever they have had any shots of blood draws, and even nursed A in the hospital while they performed various procedures (and the hospital staff appreciated not having a squirming, screaming baby fighting them!).  This time, however, the medical assistant told me I would have to wait to nurse her until afterwards as “she could choke”.  The statement was humorous.  Studies have been conducted on infants younger than six months of age, showing that their pain response was significantly lessened when allowed to nurse during painful procedures, such as shots.  Even funnier was that A was almost two years, an expert at nursing, and at that point I was not exactly “busting full” of milk.  Our pediatrician was on maternity leave, so I told the assistant that she would not be touching my child and I left.  I wrote a long letter to the head of pediatrics for that clinic with my complaint, advising that despite like our ped, I would not continue to take my children to a place that refuses to practice evidence-based care.  To my surprise, our pediatrician found out about my letter (while still on her leave), found the study I referenced, stuck to my side and has since changed the policies at that clinic.  A few months later I returned, A in tow, and she received her shot, hardly noticing it as she was comforted by mama’s breast.