A friend approached me recently about natural (medication-free) childbirth. I had chosen to pursue a medication-free childbirth with my son 3 years ago for several reasons, the least of which may have been a fear of needles. My friend was also interested in pursuing it, but everyone kept telling her that she was naive and would be yelling for an epidural once in labor. She wanted to know how natural childbirth was for me, whether I would do it again, what was helpful, and what was distracting.

After telling her that I received the same comments from those around me (and that I attempted to use them to fuel my resolve for a medication-free childbirth*), I answered her questions in this way:

PLAN AHEAD AND HAVE A COACH 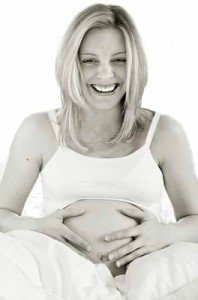 First, I would not have been able to do it if my husband and my doula had not had as much information about alternative pain relief and the reasons to not get an epidural as I did. My husband and I both read “The Thinking Woman’s Guide to a Better Birth” (at least, he did the first half or so). We also attended an estimated 30 hours or more of natural childbirth classes together. So, I would definitely do as much as possible to have your husband or partner involved with gathering information and planning. Talk about what you want to do in early labor, active labor, how you want to push, what role you’ll need others to play, etc. For example, my husband and I had a secret hand sign for when I was wanting the doctors and nurses to leave so that he and I could have some privacy to discuss a decision.

HOW WAS NATURAL CHILDBIRTH FOR ME?

…It’s doable. When you get to the point where you feel like you can not do it anymore — you’re almost there, so don’t give up! We learned this in our childbirth classes and it was true for both myself and a friend of mine; we were a matter of a couple of hours away when we got to that point and started pushing soon after that. I will attempt a natural labor with no medication again next time, however, I didn’t feel that way right after labor. At first, I felt like, “WE ARE HAVING NO MORE KIDS!”, then about a month later I felt like, “IF we have kids IT WILL BE A LONG WAY OFF!” and then at two months or so I would say, “If we have kids, I am getting an EPIDURAL!” Now, I really want to get pregnant again and labor naturally. So, my point is, I’m not going to say it was easy, but I got over it.

WHAT WAS HELPFUL DURING NATURAL CHILDBIRTH? 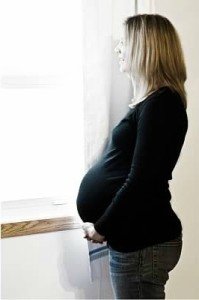 40 weeks pregnant – I had no idea I would wait another week for labor to start. (Photo by Melissa Heffelfinger Photography)

Labor pain was different than any pain I’d felt before, not just because it was more painful, but because it is a different kind of pain. It’s not like you stubbed your toe and now you hurt, or you broke your arm, or some other kind of accident. Labor pain is supposed to be there and it has a purpose. This was what I kept thinking about. It was helpful for me to use that as my mantra during labor. A friend’s mantra was that she and her daughter were in it together — it’s not easy for the baby either, but your bodies work together to make it happen.

It was also helpful for me to remember that the average birth is 16 hours, so I didn’t expect the baby to just pop out. My labor was about 17 hours. My friend’s was 12. However, I ignored the clock for a long time until my doctor said, “We’re going to have this baby before 7.” ( I DID NOT.) So, ideally no one mentions time. You might want to consider talking to your doctor or midwife about this beforehand. I specifically chose an OB who was supportive of medication-free childbirth. I can not say enough about how much of a difference it meant to me that my OB truly felt that my birth was my birth. She was incredibly supportive of whatever I wanted my birth to be, and we talked about laboring in the tub and her history with medication-free childbirth at my first appointment.

I walked around for the first 6 hours or so of labor, and I think this helped progress labor and keep the baby in a good position. For me, I simply couldn’t be sitting on a bed for hours at a time. I needed to be up and moving around.

As much as the hospital staff (except my OB) discouraged eating during childbirth, I had planned ahead and brought simple snacks as a way to signal my body to re-energize. The hospital also provided me with popsicles (thanks again to approval from my OB). I will never be able to tell you how good that food tasted during labor; it was heavenly.

During pregnancy, I also trained my body to respond with relaxation to certain scents. I attended an aromatherapy clinic during pregnancy where I was able to have several natural oils, sprays, and lotions tailored to my needs and preferences. I used these during baths and before sleep while I was pregnant so that my body would associate these scents with relaxation. There was also one lotion that had oils meant to increase contractions, which I used only during labor.

I used an exercise ball. This allowed me to be seated, but be upright enough to keep the baby in an appropriate position. It also allowed me some rhythmic motion which helped me deal with contractions.

“The Thinking Woman’s Guide to a Better Birth” helped me. “Ina May’s Guide to Childbirth” is also good, but mostly full of anecdotes. The friend I mentioned above said she liked Ina May’s guide, though.

I had my heart set on using a portable hot tub for pain relief, but the water at the hospital doesn’t get very warm because they have a safety limit on it, and the tub also leaked water. Once the luke-warm water filled the tub, it was so cold that it actually made the pain worse and give me chills. The leaking was a serious safety issue. These issues actually ended up slowing my labor and causing me frustration. Next time, I will probably just use the shower (at least if we’re at the same hospital).

When I was pushing, there were several different types of tones from machines — the incubator, the doctor’s beeper, lights, etc. At the time, I had no idea where they were coming from, and it was very distracting and made me lose focus during pushing. Several months later, my husband and I talked about the noise level. Next time, he will be in charge of telling the hospital staff to turn off whatever they can or, at least, lower the volume. This also might be better in a birth center than a hospital. 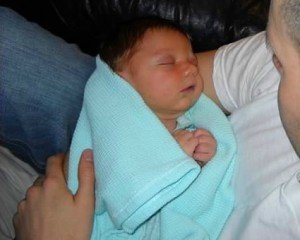 Ultimately, the thing that helped the most was gaining as much information as possible about natural childbirth, so that I didn’t have to succumb to social expectations for induction and epidurals. To have a successful medication-free birth, especially in a conventional hospital, you will have to be informed and steadfast (if not stubborn) regarding your decisions. I would never expect someone else to pursue a medication-free childbirth, whether they were even interested in it or not, but I hate that it is acceptable to belittle a mother who wants to avoid an epidural. As hurtful as it was for my  decisions regarding birth to be disrespected by people I respected, I’ve since learned that, as parents, we have to make hundreds of careful decisions about the health and well-being of our family and children without concern for what someone else might say.  This is the central theme that I love about “I Am Not the Babysitter”. The point of this community is to allow parents to feel supported to make the decisions that are right for their own family, and that is what initially attracted me to this blog.

Truth be told, the naysayers didn’t say much about natural childbirth after I’d done it.

***Side-note: I want to point out that a common way to belittle moms who want to avoid epidurals is to say that we “have something to prove”. This very rarely has anything to do with why women choose to avoid epidurals. This type of comment irks me, makes me a little sad, and is hurtful to the empowerment of all women. Here’s why.

Kendall Hoover is a web content and non-fiction editor who helps bloggers make money on their blogs, and improve their pagerank. She is also Secretary of Fayye Foundation and is passionate about pre- and postpartum care for mothers. She is a military spouse and mother to one toddler son, so when she’s not reading or writing, she’s the project assistant on elaborate Lego projects.