Images and text by Susan May.

On July 2nd of this year, 2014, I will mark 8 (EIGHT!) straight years of breastfeeding. I’m almost positive (like 99.99% sure) that there was not even a day in that 8 year stretch that went by without at least one session. I know this sounds quite impressive or even unbelievable to many people. Some might think that it is even a “sacrifice” on my part. But honestly I don’t often think of it as “EIGHT YEARS”. From the very beginning it has been one day at a time, and now it is such a natural part of our family life that it is not a big deal at all.

Maybe I should back up, to the very beginning. I knew when I was pregnant with my daughter that I wanted to breastfeed. I did not have too many preconceived ideas about how long I might nurse her. My mom breastfed me and my sister, for about a year and nine months, respectively. My cousin, who is like a big sister to me, also breastfed all 3 of her children, each for about one year I believe. I liken a year to the “perfect” amount of time to breastfeed in our culture – long enough to be a “good” mom, but not so long that you are “weird”.

I don’t even really remember when I came across the idea of “extended” breastfeeding or child-led weaning. I do remember reading Dr. Sear’s book Nighttime Parenting while I was still pregnant. So I know I was exposed to the ideas of Attachment Parenting before my daughter was even born.

Marisol was an awesome little nurser. From the start she and I had no real issues with breastfeeding. I might have been a little sore at first because I remember a month or so in I noticed that it wasn’t hurting and I thought, “Oh! So this is what it should be like!” 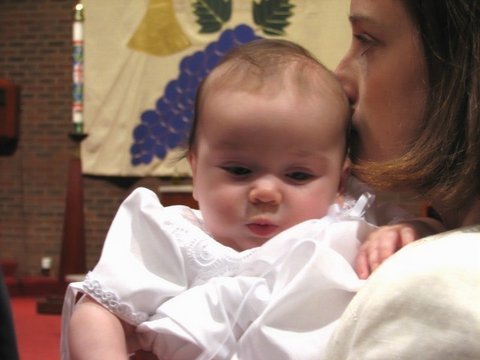 I actually can’t find any pictures breastfeeding Marisol. This was her baptism when she was about 3 months old. I imagine I stressed about whether she would need to nurse during the service. No mother should ever stress about it, in my opinion. But the truth is many of us do. I wish I had taken pictures of us breastfeeding.

When Marisol was 6 months old one of my best friend’s mother asked me if I was “still” nursing her. Um, yes! Sometimes I felt funny at other people’s houses when it seemed like I had “just” fed her and she seemed to want to nurse again. Looking back on these things now is almost mind boggling. The perceptions of breastfeeding in our culture are so skewed and wrong. (Read here for a different, AMAZING cultural perspective on breastfeeding.) This is why I have a desire to let other women know that it is fine, even wonderful, to breastfeed an “older child.”

I became pregnant with my son when my daughter was about 2 years and 4 months old. She was still going strong with her nursing habits – in fact we were co-sleeping and she didn’t even sleep through the night yet. When I went to an OB/GYN to confirm my pregnancy the doctor told me I should wean Marisol by the start of my second trimester. By this time I was a bit more of a rebel, so I nodded my head and said, “mmm hmm” and then I went home and Googled breastfeeding while pregnant. (Go ahead, do a search now and you will find things like this.) My search confirmed what I suspected and knew in my heart – for most women and child, breastfeeding through pregnancy is perfectly safe. So I ignored that OB’s advice and switched my care over to midwives at a birth center.

While pregnant I read La Leche’s book “Adventures in Tandem Nursing: Breastfeeding during pregnancy and Beyond.” I felt prepared to continue my breastfeeding relationship with Marisol for as long as she needed and wanted to. However, once her baby brother arrived my feelings changed. I experienced a very strong aversion to nursing Marisol pretty soon after his birth. I struggled with the feeling because I really wanted to keep meeting her needs, whatever they were. For about 2 months after Gerry was born I did continue to tandem nurse. I was especially glad when Marisol came down with a bug. For a couple of days she barely ate and I pretty much nursed her and Gerry around the clock. It was hard but I was glad that I could do it. 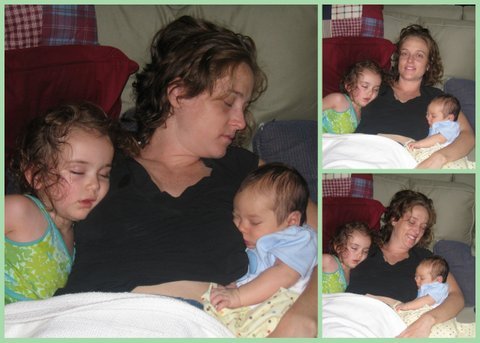 These pictures were taken only a week or so before I decided it was time for Marisol to wean. I imagine one or both of my children nursed to sleep. Also, this series of pictures crack me up because you can see that I was “fake” sleeping for the photo-op.

Marisol started to go longer in between breastfeeding sessions – her record was 2 days. She was sometimes falling asleep without nursing too. But as we prepared for bed every night she would proclaim in a sing-song voice, “Milky, light, and books – my three favorite things.” Finally, one night when I tried to gently set a boundary (aka Mommy needs you to stop now because I feel like I might throw you off me!) and she cried bitterly on the bed, my husband looked in on me and I silently said, “I’m done!” “You’re done?!?” he mouthed back in surprise. So that week we gave Marisol a day and told her we’d get Three Musketeer Barbie (she came with a horse!) at the end of the week if she didn’t nurse in that stretch of time. My poor girl was never one to be bribed though. She wanted the Barbie – Yes – but she also wanted her “milky”. The hardest part for me about weaning Marisol was the verbal expression of her sadness: “You’re making a BIG mistake” she told me every day for a couple of weeks. 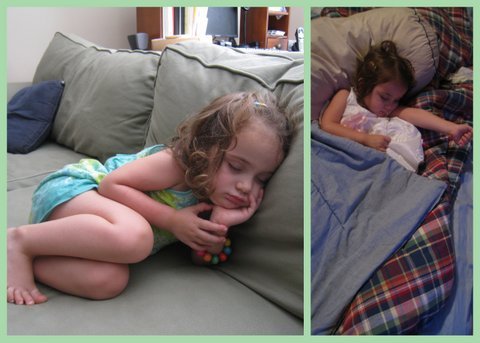 Falling asleep on her own, sans nursing.

The night I decided it was time (and I knew in my bones IT WAS TIME), I sobbed in the shower. I felt like this was the first time I was really letting my daughter down.  But I knew I was ready to stop because I no longer wavered in my decision. Besides the one or two times that I nursed her when she sleepily nuzzled me in bed (she didn’t seem to remember in the morning), we never again had “milky time.” With lots of love and cuddles and distraction we pulled through. In hindsight, it wasn’t that traumatic. Marisol received the benefits of my breast milk, and that very particular loving bond between us for 3 years and almost 3 months of her life. That winter, just a few short months later, I asked if she remembered nursing. Her response amused me: “Yes, I did that when I was a baby.” 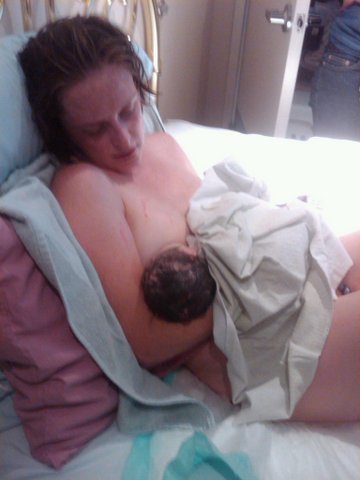 This picture is from moments after Gerry’s birth and I am in love with it. I find it ironic that I cannot find one picture of his big sister breastfeeding, and I have one of him nursing at my breast with his umbilical cord still attached to me. I think it is a great symbol of the changes in me as a mother and how much Marisol helped me grow as a person.

And so, with the end of her “extended” breastfeeding stint, her brother’s began. At first I thought Gerry was “different” than Marisol was as a baby – “easier” or more “laidback”. It soon became clear, and especially now looking back, that *he* was not different – *I* was.  Instead of trying to get him to sleep in a crib, he co-slept with me from the start. Instead of worrying about when and where he napped, I just went with it. While he was an infant I thought surely he would wean sooner than Marisol did. He just seemed like a happy, content little guy, so I thought he wouldn’t “need” to nurse as long. Ha! That is so funny to me now. Maybe he was so happy and content BECAUSE of the breastfeeding. (Duh!) Besides, why “happy and content” would mean earlier weaning I’m not exactly sure (especially since his sister was generally happy and content too). Sometimes we are just blind to the obvious I guess!

Interestingly enough, Gerry and I did have some challenges in his first few weeks. I always like to share this with my students (I teach Hypnobabies childbirth classes). Just because *I* had been nursing his sister for 3 years, my “expert” status didn’t mean we wouldn’t have our own obstacles to overcome. I believe the problem was that I had too much milk. He would cry and fuss, and I would try to nurse him. He would latch and unlatch and cry more  – it just was hard. Luckily, I believed that perseverance was the answer and sure enough within a couple of months my milk supply synced with his needs, and he became a pro – just like big sis. 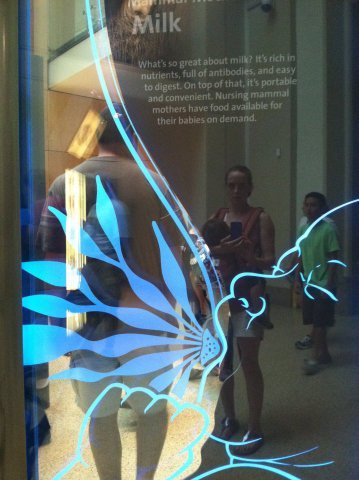 I love this picture of Gerry breastfeeding when he was 2 years old in the ergo at the National History Museum.
Our reflection fits perfectly in this display of “What’s so great about milk?”

As with Marisol, I had no set time in mind for how long Gerry and I would continue our breastfeeding relationship. Before having children I never imagined breastfeeding one child for 3 years, much less 5 years! I think this is a common experience for many mothers who practice “extended” breastfeeding or child-led weaning. Yes I keep putting it in quotations because to me it makes more sense to call it *normal* or just plain ol’ *breastfeeding*. We take it one day at a time, and the days quickly melt into weeks and months. Before you know it years have passed. I have to admit that weaning my daughter was a tough experience. I was just talking to her about it today as I wrote this piece and she assured me that she is fine. I knew that. But still it feels good to take an even gentler approach with my son. We’ve started to talk about when he might stop having “muk”. Right now his 5th birthday is on the table as a possibility. That is only 3 short months from now. To him “100 days” sounds like a long time, but I know better. His birthday is going to be here in the blink of an eye. And if he is ready to give up “muk” then I’m 100% behind him. But if he rethinks this deadline I’m sure we will find a solution that works for both of us. Either way, it seems that the end of our breastfeeding relationship is drawing nearer.

Most people would have no idea that my almost-5-year old still breastfeeds. It almost always happens at home. He nurses to sleep (with shows on an iPhone!) almost every night. It would be easy to keep it a “secret.” The thing is I don’t want to keep it a secret. Even though it pushes my comfort levels, I want to share our story. I want people to know that it is not weird or unhealthy. I know some people may want more “proof,” like meeting my son when he is an adult or something like that. I guess that for now skeptics will need to trust me. So even though I feel uncomfortable nursing Gerry in front of some people, I’m willing to share with the whole world via the internet that YES my boy loves his “muk,” and I will not be shamed into silence. 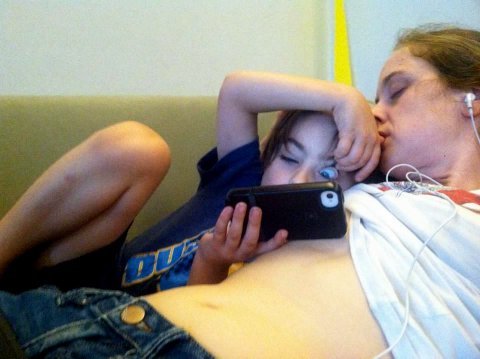 I just took this picture this week to go with our story. I love it. I think it is a great example of what normal breastfeeding looks like. And for those worried about these things – Look! You can’t even “see anything”! You know, like that offensive breast tissue, or (GASP!) Nipple! Unless you count my pale white belly – some might be offended by that.