Image and text by Libbie.

Breastfeeding did not come easy for us. My son was due on December 25, 2011, but my water broke on December 3, 2011 at 36 weeks, 6 days. I was both surprised and worried. I wasn’t even full term. When we arrived at the hospital, they told us if he was born before midnight he would have to go to the NICU. If he was born after midnight we could keep him. We hoped for the latter. Sixteen hours of labor and minimal progress from 4-6 cm later, my doctor recommended a c-section. He was born on December 4th, 2011 at 10:34 am by emergency c-section. Afterward, my doctor informed me that he’d had his hand down the birth canal with his head and that’s what had prevented my labor from progressing. She said he was never coming out. My husband also mentioned later that he’d overheard the nurses saying that I was starting to smell like I was getting an infection. As he put it, I had started to “smell pretty ripe down there.” Thanks honey.

I don’t believe it was the c-section itself that contributed to our breastfeeding difficulties, as much as the actions of the staff afterward. He was born, I kissed him and he and my husband were sent away to the nursery for what seemed like an ETERNITY. I was separated from him for several hours because the staff thought I needed some sleep. I disagreed then and I disagree now. I needed to be with my baby. I have since been informed that the hospital policy has changed. They now place the baby on mom’s chest for skin-to-skin immediately after the c-section while they stitch mom up. I feel like I was robbed of that crucial time with my baby. In hindsight, I wish I had done more c-section research, but I really had no idea what to expect. No first time mother thinks they are going to end up with an emergency c-section.

Things seemed like they were going OK in the hospital. The nurses and LCs were able to get him to latch, but I couldn’t for the life of me figure it out. Then a nurse brought some formula and I dropper fed it to him, because I’d just had this tiny little baby and I was afraid he might starve. Of course I wish I hadn’t done that, but again, I didn’t know that I should research these things.

When we got home, things were even more difficult. At least my milk came in on day 5, but I just couldn’t get him to latch well on my own. Thank goodness a fabulous LC foresaw this and scheduled me a series of appointments before I left the hospital. I’m pretty sure breastfeeding wouldn’t have worked out if it wasn’t for her. It got so bad that I found myself in a mess of tears on Christmas morning at our family celebration. I was barely pumping anything (despite pumping every three hours around the clock), he wasn’t latching properly, he was getting supplemental bottles with every breastfeed and I was convinced my milk had all but dried up. I was in a bad place. At that time it seemed as if my happiness hinged on how well breastfeeding was going and I was about 90% sure it wasn’t going to work out. I was devastated. 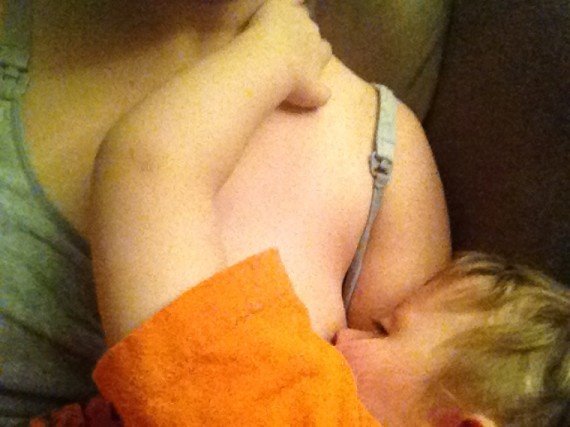 I don’t quite remember the next couple days, it’s all a blur, but I do remember the morning of December 29th, 2011. Four days after his due date, L latched beautifully for the first time. He nursed like a pro from that day forward. To this day, I always say that if he could have chosen his own birthday, he would have been 4 days late. That’s when he was ready.

I was able to take a 15 week maternity leave, which was fabulous and then I went back to work part time, 3 days a week. L went to his grandparents while I was at work. This is when I had to start pumping again. I had stopped pumping shortly after L latched per the advice of an LC who could see that the pump was really stressing me out. Plus, I wanted to breastfeed him whenever possible and avoid bottles. In fact, he hadn’t had a single bottle in months when I dropped him off at my parent’s house. I hoped he would take the bottle, but I wasn’t sure that he would. He did and all was well.

I spent the first year of my son’s life thinking that I had low-to-just-enough supply because I’d never been able to pump very much. The most I ever got from a pumping session was 4 oz and usually it was more in the 2 oz range – from both breasts. It took me over a year to come to the conclusion that I am someone who just doesn’t perform well for the pump. Looking back on it now, I think he’s always gotten plenty of breast milk from nursing; my body just didn’t want to give it up for the pump. I stopped pumping at 12.5 months because I wasn’t really getting much anyway, and switched to giving L whole milk from a cup while he was away from me. I haven’t had a “supply problem” since. Around that time, he completely rejected the bottle. He still loved to nurse, though. He would sign “milk” (we use the word “nurse”) as soon as I got home from work. At his one year appointment, his pediatrician actually informed me that L was no longer getting any calories or nutrition from my breast milk. I pretty much called bullsh*t on that one and didn’t ask him any more breastfeeding advice. It’s sad that someone in the medical community could be so uneducated on such an important subject.

At 15 months I thought L was weaning because he inexplicably refused my left breast for 48 hours. He took my right breast just fine. Forty-eight hours later, he took my left breast like nothing had ever happened. In hindsight, I think maybe he had a crick in his neck or something in it that made it temporarily uncomfortable to nurse on that side. He’s never done anything remotely like this since. I do wish I had pumped my left breast during that time though. I wouldn’t have gotten much but it would have been something. My left breast still produces, but it’s pretty lame compared to the right one.

Now, when I first embarked on this breastfeeding journey, I had the goal of going for one year. My mother breastfed me for 10 months and I thought if I can do more than that, that’ll be great! However, when L’s first birthday started to approach, it became very clear that neither he nor I were ready to be done. Sometime after his first birthday, we started offering L cow’s milk and snacks along with breastfeeding. Sometimes he wants and enjoys the milk and snacks, other times he asks to nurse instead. He’s pretty adamant when he wants to nurse and he always asks to nurse at least two times per day (first thing in the morning and when I get home from work are his favorites). He dropped his before bed feeding on his own around 9 months. At that point I started doing dream feeds, which I continued until 18 months when he no longer wanted them. Dream feeds were a life saver! They helped both of us get more sleep.

I really thought that he would choose to wean himself before the age of two. Before I had L, I had never heard of anyone nursing a child longer than 21 months. But he just hasn’t been ready to wean yet. He knows what else is out there, but he seems to prefer the good stuff that comes from mama. My husband and I do differ on the subject. He was so incredibly supportive during the first year, I can’t say enough about it. After which point, he wanted to try weaning L away from the breast. Against, my own instincts, I did offer L other things and was pleased to find that he still liked my milk best. Yay! Now that L’s over two years old, my husband begrudgingly doesn’t say anything, but I know he wishes we’d be done. It hurts his feelings when he brings L home from a long day at work and they have 1-2 hours to spend together, but all L can talk about is mama coming home so he can nurse. What can I say? He’s a mama’s boy. I don’t think weaning is going to change that. My in-laws definitely think he should have been weaned a long time ago (I’m sure my husband hears it from them, and I’m glad he doesn’t share it with me). My parents, to my surprise, have been very supportive. They think L will stop when he’s ready. Go mom and dad! 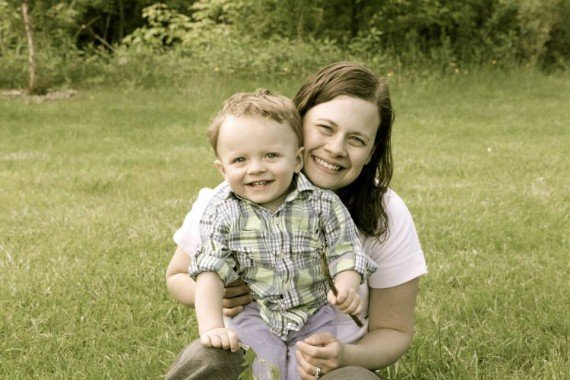 L is 28 months old now. These days he politely asks and signs “nurse, please” or says “wanna nurse.” I’m not sure how long he will nurse, or if we are doing child led weaning or not, but I do know that neither he nor I are ready to be done yet. Nursing has been such a blessing, especially during times of sickness. When he refuses to eat or drink anything, he will still nurse and I’m confident he’s staying hydrated and getting nutrition. My breasts seem to be pretty flexible too, he could nurse twice one day and eight+ times the next and I feel neither empty nor engorged. Thank goodness for organizations like La Leche League, IANtB, the Leaky B@@b and KellyMom for showing me how normal and natural it is to breastfeed a toddler.

April is Child-Led Weaning Awareness Month! If you would like to contribute, please e-mail your story and photo(s) to info(at)iamnotthebabysitter(dot)com.

Apr 7, 2014Jamie
Plant PregnancyWhat Does a Well-Behaved Child Look Like?