Top 5 myths about U.S. cesarean rates: DEBUNKED in one video 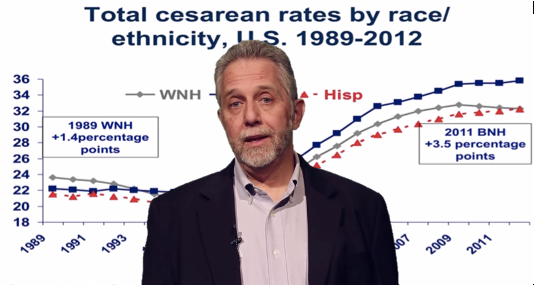 Ever been in an argument about the causes of the increase in cesarean section rates in the U.S.? “But moms want them!” they say. “They’re too posh to push!” “And gestational diabetes! Babies are just too big now! They don’t fit!” “Women are too fat to give birth naturally!”

If you are the person on the receiving end of this commentary, or if you have made these assumptions yourself (Which is nothing to be ashamed about. After all, I’ve heard doctors make them.), there’s a video you should watch. With this one video, you too can drop the science like it’s hot whenever this heated topic comes up.*

For several years, I have been following the work of Eugene Declercq and the Childbirth Connection in gathering self-report data on the birth experiences of mothers in the United States. Declercq, a professor at the Boston University School of Public Health, has done a tremendous amount of work gathering large amounts of data on pregnancy and birth in the United States and making it available to researchers. This is a very important part of solving our problems with maternal mortality, our breastfeeding rates, and maternal rights and satisfaction.

But Declercq is also committed to making sure this information is disseminated to and understood by the public, so that they can make educated decisions about their own healthcare, as well as participate in promoting large-scale change. Last year, he produced an updated “Birth by the Numbers” video, where he breaks down all of the data from the Listening to Mothers III Survey in laymans terms, so the public can be informed and empowered to support change in our maternity system. His most recent video comes on the heels of the World Health Organization’s recent warning against c-sections that are not medically necessary. In it, he addresses the top five myths about the cesarean rates in the United States:

The video runs 20 minutes, but this really just isn’t a topic that can be distilled down to a length of the average Internetter’s attention span. The U.S. cesarean section rate is an incredibly complicated issue with social, political, economical, medical, and legal dimensions. There are many different interests at play in any given delivery room: the mother’s health and dignity, the fetus’ health, the doctor’s integrity as a practitioner, the doctor’s insurer’s interests, the hospital’s bottom line, and of course (because America) the lawyers’ interests. This video mostly focuses on statistics and not too much into the more social aspects of the issue, but what it does accomplish is make a case that this issue is not as simple as we thought, and that we need to pay attention to the social complexities and come up with equally comprehensive solutions.

Be sure to check out Science and Sensibility’s Top 5 Takeaways from this video.

* (Please be tactful around mothers who have had c-sections though! Guilt is a common feeling after c-section, and you don’t want to upset anyone!)

Apr 13, 2015Jamie
How to file for divorce online - 5 stepsCanada Is Not Just Desolate Tundra