Home > Can You Really Get Arrested For Breastfeeding While Drinking Alcohol?

Can You Really Get Arrested For Breastfeeding While Drinking Alcohol? 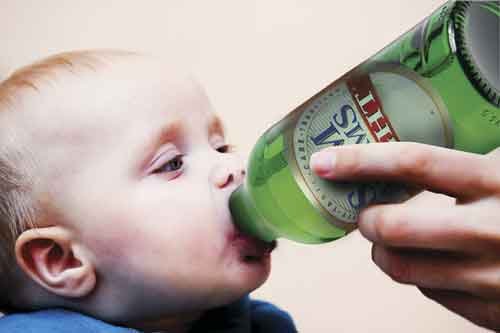 A server at Gusano’s Pizzeria in Conway, Arkansas called the police after she saw a patron (Tasha Adams) drinking alcohol while breastfeeding her child at the same time.

The server said said she was fired shortly after the incident, but Gusano’s said the call to the police was not the reason she lost her job.

In light of this incident, I think we should discuss the many issues surrounding the consumption of alcohol while nursing.

It is not against the law for nursing or pregnant women to consume alcohol.

Tasha Adams was arrested for endangering the welfare of a minor, but I am not sure how those charges could legally be made, unless she was intoxicated to the point where she could not take care of her child and there was no other adult with her who could take on the responsibility of caring for the infant. * (See the update at the bottom of this post.)

Myth:  Drinking while breastfeeding puts your baby at the highest risk for exposure to alcohol in the breastmilk. 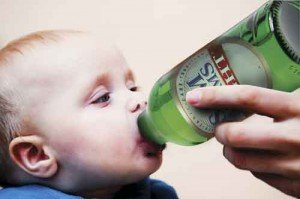 Truth: When your blood alcohol level reaches its peak from drinking, so do peak levels of alcohol in breastmilk.

“For normal social-type drinking, the highest BAC is usually achieved within 30 minutes after completion of consumption, though it could take as long as 60 minutes. When large amounts of alcohol are consumed over a short time interval, or when a large quantity of food is eaten with the alcohol, the absorption phase may not be complete for up to two (2) hours after last consumption.” – Source

Myth: Pumping and dumping is a way to speed up removing alcohol in breastmilk

pumping and dumping is needed to rid the body of alcohol in breastmilk, even if the blood alcohol level has since dropped to normal levels and the breastfeeding mother is sober.

Truth: Sorry, you can’t speed up the process. On the flip side, if your alcohol level has returned to normal, so has your breastmilk. There is no need to pump and dump unless you are engorged and uncomfortable. Other than that, it serves no purpose.

From Dr. Jack Newman: “Reasonable alcohol intake should not be discouraged at all. As is the case with most drugs, very little alcohol comes out in the milk. The mother can take some alcohol and continue breastfeeding as she normally does. Prohibiting alcohol is another way we make life unnecessarily restrictive for nursing mothers.”

So, can alcohol abuse have negative effects on breastfed babies?

Yes. Excessive drinking by the breastfeeding mother may result in slow weight gain or failure to thrive in her baby.  – Source

Daily consumption of alcohol (1+ drinks daily) has been associated with a decrease in gross motor development. –Source

Common sense says you need to work on your own healthy habits in order to provide your child the best nourishment from your body.

* Update: Tasha Adams’ attorney, Reggie Koch, has since been in contact with us. He said that his client had only 2 beers in a 1 1/2- 2 hour period, and the servers that night have corroborated this story. Additionally, she had a large meal and never was breastfeeding and drinking simultaneously. Mr Koch also said his client never at any point through the evening felt the effects of the alcohol she was consuming.

The woman who called the police was an employee of the restaurant, but she was not on duty, nor was she in any way serving at Tasha Adams’ table. According to Mr. Koch, she was only in the restaurant for 10 to 20 minutes before calling the police.