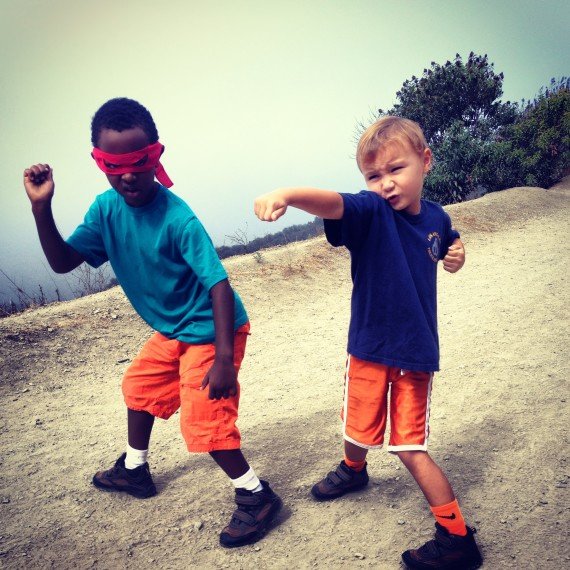 (We had driven passed quite a few of these moments recently…)

The truth is, currently white men make up over half of the prison population, but based on US population, black men make up the highest percentage incarcerated. In fact, according to the Bureau of Justice Statistics 1 in 3 black men can expect to go to jail in their lifetime.

The boys know our country’s history with minorities; they understand that generations of repression has caused significant damage and how the current stereotyping and racism stems from the same line of thinking that caused the initial unjust and brutal treatment of a group of people.

However, now it is time for the boys to discover the ugly details of it all. Why, even though Samuel has been padded in our white privilege as a child, he is by no means safe from these sobering facts, and what they mean for all of us today.

We took the boys to the police station and they were allowed to tour the desks and see the people on certain lists. Most happened to by white (this was partly do to the area we were in, and racial zoning is a whole other issue that we will get into later) but hopefully it allowed them to see that no one is immune from the justice system. Whether or not it is broken, there is hope for improvement, and hopefully in my lifetime, and definitely in the boys’, they will be so educated on what is causing these problems, so aware of their privilege and the wounds of the past, to actively work on healing the bigger issue.

Aug 30, 2013Jamie
Robin Thicke on the VMAs (Post Hijacked by Alan Thicke's Awesomeness)Do You Ever....