My husband lost his mother to cancer when he was only eight years old. He still vividly remembers the wigs she would wear during the time of her treatment.

A couple of months ago we started talking about his mother and what he remembered about her when she was ill. The conversation ended with Brian deciding to grow out and donate his hair to Wigs for Kids.

Brian has been successfully growing out his hair for months, but he hit a very awkward stage the last few weeks. I assured him I could style the mop on top of his head. I am the first to admit I was overly-confident. I even busted out the diffuser (yep, pulling out all the stops). When I stepped back to admire my work I realized my poor poor husband appeared to have been electrocuted! (we had to leave for a nice dinner minutes after this photo was taken): 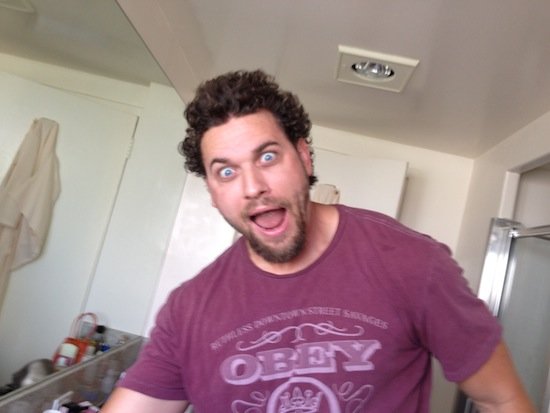 At this point, Brian is dying to cut his hair. Mr. B almost broke down and shaved his head, but stopped. He reminded himself the hair he was about to cut and throw away could make a world of difference to someone who doesn’t have any. However, the temptation is still lingering.

We were thinking trimming it may help him feel less awkward, but even more inspiring would be some words of encouragement! Any comments you have of support may keep his urge to grab the clippers at bay for another few weeks. We all know the end result will be worth it.

Jun 11, 2012Jamie
This is Why I Let My Children Watch TVNatural History Museum- Butterfly Pavilion