Breastmilk and cavities: Examining the evidence 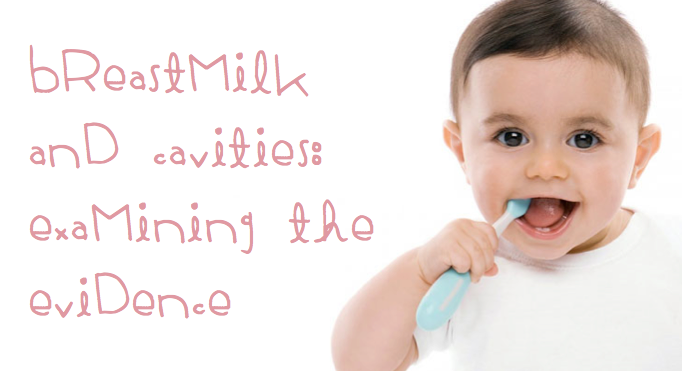 Have you ever wondered why babies get bottle rot (<— not pretty) from cows milk but not from human milk? As always, Evolutionary Parenting‘s Tracy Cassels drops the science, this time in an article on Cafemom.com.

From an evolutionary perspective, I have always found it to be highly unlikely that breastfeeding in and of itself would cause caries. Previous to the introduction of agriculture (which happened at different times for different societies, but the earliest signs of agriculture are found around 12,000 years ago), human children were likely breastfed until somewhere between ages two and seven, depending on their ecological situation and available resources. Developing caries during this crucial period in a child’s development would have been a potentially very serious disadvantage in terms of survival. Infection, pain, and aversion to food would have seriously increased child mortality rates.

Furthermore, it is generally accepted that although humans did get dental abscesses (ow.) as a result of bacterial infections or broken teeth, tooth decay did not appear in humans until the advent agriculture and carboloading. Before the introduction of grains into our diet, we did not really have that much sugar in our diet. Even fruit and berries would have been a relatively rare treat. Examination of the pre-agricultural fossil record (<— prepare for gross pictures! But also cool ones of ancient kiddy skulls…awww!) found very few caries in the baby teeth (sciencey term: deciduous teeth!) of ancient kiddos. Yay! In every drop of breastmilk, there is a bajillion grams of awesome. Science says so.

In addition, breastmilk contains a number of antibacterial components that would have fought periodontal disease-causing bacteria, including the protein lactoferrin and another component that Tracy didn’t mention, the hormone melatonin. Other components of breastmilk, such as omega 3 fatty acids and vitamins C and D, help fight inflammation and tooth decay as well.

Tracy found that adding even small amounts of sugar to breastmilk can cause the child to develop cavities. This supports the evolutionary perspective, which is that dental caries are a product of the novel environment in which we live. Further, while it can safely be said that breastfeeding itself does not cause decay, caries are sometimes found in exclusively breastfed infants.

So what to do, then? My mother used to tell me that if I didn’t brush my teeth, the Cavity Man would come for me. Protip: Don’t do that.

Studies have shown, again and again, that good oral hygiene is extremely effective in the prevention of cavities. This needs to start young, when they are babies, to develop good habits. Water fluoridation and fluoride toothpaste will help decrease risk of developing cavities, but the American Academy of Pediatric Dentistry advises against introducing fluoride until 6 months of age. When your child is little, you can use just a toothbrush and water, or a non-fluoridated toothpaste for babies.

Read the rest of Tracy’s findings, and how she came to her conclusions, and more about how cavities are formed here. Also check out KellyMom’s very thorough article on the subject.