When I became pregnant, and even before, I knew I wanted to breastfeed my baby. I had always tended toward the “crunchy,” so it did not come as a surprise to my friends and family when I began the preparations for an epic breastfeeding journey. I signed up for the breastfeeding classes at my local hospital, bought the nicest breast pump, had my milk storage bags ready, the nursing pillow, the nursing bras, nursing covers (HA). I had it all. I was PREPARED. But on that hot and steamy day in July when it rained for the first time in months, I was not prepared for what was to happen. 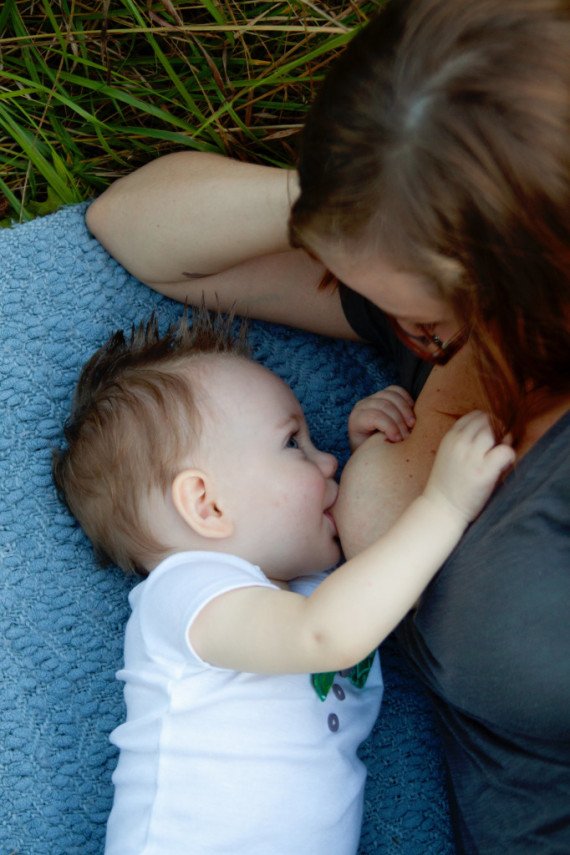 The birth in itself was nothing too out of the ordinary. Labor was easy, and I took pushing very seriously. So seriously, in fact, that through my extreme work out while pushing, I raised mine and my son’s body temperature by four full degrees. When he was born, his temperature was so elevated that they had to take him for observation within 30 minutes of birth. I got to nurse him for all of five minutes before he was gone. My beautiful brand new baby was whisked away and there I was, left to wait for three hours before I could see my new little bundle of joy. Before he was brought to me I didn’t feel the love for him I thought I would, but I thought surely when I held him in my arms and looked into his eyes I would feel that “feeling” that new mother’s get. Finally, they brought me my new beautiful, healthy, bouncing baby boy but when I looked down at him I didn’t feel the joy that I thought I would. I didn’t feel an instant bond with him. I didn’t think that the sun shone from his eyes and that he embodied love. To me he was just a squirming little goo ball that looked a little bit like my husband…that pooped. A lot. And cried. A lot.

I had looked so forward to this day.  We so wanted him, especially after a loss, and we had planned and prepared and waited 40 weeks for him and here he was…and I felt…not a whole lot. Was there something wrong with me?? I kept thinking surely something would click and the clouds would part and I would hear angelic singing as the love began to gush form my heart, surrounding my precious newborn. I would see him as a beautiful creature of God, instead of the crying, pooping, gooey little fellow that he was. But for me, it was not so. I couldn’t believe it.  My perfect, beautiful, rainbow baby and I felt more love at the time for my toothless elderly Chihuahua than I did my son.

In the hospital, he cried a lot and they convinced me to give him formula because, as the nurse said, he was “starving to death,” and “dehydrated”.  I later learned that both of these things were untrue and a scare tactic used to make me give formula to my screaming child so that both he and I (and his dad) would calm down and leave her alone. And so began the nipple confusion. Ohhhhhhhhhh, the dreaded nipple confusion. It didn’t help that I was the first of my close friends to have a baby and breastfeed. I had little to no support, and I was extremely embarrassed and nervous to nurse him in front of friends and family, let alone in public. Also, I had terrible tearing during birth and was in immense pain any time I had to sit for over three weeks. Sitting to nurse a baby all day every day was just almost impossible. So I pumped. And I pumped. And I pumped. All of the bottles just worsened the nipple confusion and after five weeks of pumping every three hours I was resenting my baby and becoming depressed. Where was the beautiful bonding experience they tell you about? Where was the unimaginable love? I felt like a sopping wet cow leaking from every orifice, a shell of my former self. This was definitely NOT how I had planned/imagined things.

After five weeks of constant pumping I thought to myself that there was no way I could go on like this. I seriously contemplated switching my child to formula because it would have been so much easier. However, I knew that the breast was best (by a long shot) and I knew that my baby deserved my milk and my comfort and I knew I needed to do something. So we started to see a local lactation consultant (our hospital provides one to any woman, at any time, at no cost, AWESOME!). We visited her every other day for THREE weeks trying to get his latch worked out. That was the hardest three weeks of my life. We did a lot of crying during that time. Hell, there was more crying in my house since my baby had been born that I had experienced in my entire life up to then. The frustration was monumental for both my son and me. Toward the end of the third week though, I noticed that we were bottle feeding less and less, and eventually, we were down to one bottle a day.

Finally, we stamped out bottles completely. Finally, my eight week old baby was on breast milk, from the breast, and I was sustaining him. No supplements, no bottles, just me.  And my confidence started to rise. My confidence as a mother, my confidence as a women, it was rising and I was starting to feel like myself again (but like a better version of myself with the super human ability to create milk on demand!) I was really doing something! I started to feel more like myself with each day that I was able to exclusively breastfeed my son. And with each day I exclusively breast fed my son, I felt more love, and more bonding, and more happiness that I had ever felt. There wasn’t any angelic singing through a parting of the clouds. Just a lot of snuggles and gazing into each other’s eyes and a whole lotta’ love.

Even after working through the nipple confusion, it hasn’t exactly been easy. For example, at eleven months my son got six teeth in one week and went on a 10-day-long nursing strike. Yes, ten days! Everyone, including a lactation consultant, tried to tell me he was weaning. I knew better, and thanks to LLL support, research, and perseverance, we made it through. And here we are, at almost 18 months, nursing strong with no plans of stopping in sight!  We get comments such as “Oh, you’re still doing that?” and “He’s walking and talking now, it’s definitely time to wean that boy!” more often than I’d like but I just smile and let it roll of my back. I know what I’m doing is right. My son nurses when he’s nervous, when he’s happy, when he’s sad, and when he’s hurt. He nurses to sleep and he nurses to wake. It’s his happiest place in the world, and I have no plans to take that from him.

Breastfeeding my son is one of the only things in my life that I’m proud of myself for. It has been the single most profound, life-changing, confidence-boosting, wonderful thing that has ever happened to me. It has also been the single most difficult thing I have ever done. So far for us, nursing has been a mess. A beautiful, wonderful, mess. And I wouldn’t change a thing.