My sister and I had our first children 3 weeks apart.  It wasn’t planned, but it ended up being one of the greatest blessings we have had in our lives. 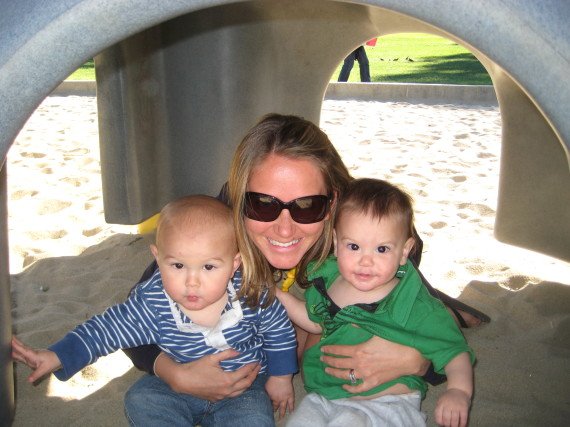 My oldest, Scott, was born at home, 2 days after his due date, no complications and we were in new parent blissdom for those first few weeks.  Breast feeding was hard.  Harder than I expected, but because I knew I had resources and support out there, it got easier.  We had a lactation consultant come to the house who proved to be an absolute game changer for me and my little guy.  My husband said he would have paid her thousands if he could have because of the dramatic change he saw, “worth her weight in gold” I believe were his words when telling other parents what a great resource lactation consultants can be.

Three weeks later my nephew was born.  When my sister got home from the hospital she had some of the same breast feeding struggles that I had.  It was so amazing to be able to breast feed together and show her some of the tricks I had literally just learned myself.  And on top of that she used the same lactation consultant.

Three weeks after my nephew came home my sister was hospitalized for a breast infection.  We thought she’d be in for the afternoon, she ended up being in for over a week and having surgery to remove part of her breast tissue and milk ducts that were infected with antibiotic resistant staph.  It was scary and stressful and more than anything just missed her 3 week old son.

We spoke on the phone that first evening and she told me her first concern was her son getting to eat enough that day and in the days that followed.  I told her no matter what we would make sure that he did and did she mind if I gave him my milk?  She said of course she didn’t mind and was relieved and thrilled to know he would get to keep breast feeding.

During Scott’s first six weeks I had been pumping like crazy, and I’m not sure why, I wasn’t going back to work anytime soon, but I just thought you were supposed to “build up a stash”.  So I built one.  And I am not a person that had a hard time producing milk, I’m the person who soaked through breast pads, t-shirts and sheets at night.  So I had stash to spare.

My brother in law would bring my nephew over several times a day and night and leave with stored bags of milk.   After the first few days I was starting to worry that I wasn’t keeping up with demand.  Enter The Pump Station in Westlake Village.  Their lactation consultants, experts and staff helped me balance my new demand with supplements and they offered their love and support as I came in day after day with some new issue or another.  Without this kind of support I don’t know that I would have been able to continue.

After 6 weeks of antibiotics and pain meds and lots of pumping and dumping, my sister was able to start breast feeding again.  Her son latched on like he hadn’t missed a day (because he hadn’t!) and their nursing bond was fully restored.  She only gained full function of one breast but that breast was able to keep up with his demand just fine and she was able to exclusively breast feed until he was eating table food and beyond.   Those fabulous women at the pump station were with her again for this part of her journey, helping her increase her supply and offering support.

None of this is meant to say that if my nephew had been fed only formula we would have been saddened at all, it worked out for us to share my milk which would not have been possible without all the support we got.  Everyone who found out we nursed each other’s babies (she eventually nursed my son down the road when she was recovered and she would watch him for us) thought it was wonderful, we received zero negative feedback.  My wish is that everyone gets the support they need, want and deserve when breast feeding and really in all aspects of parenting.

Sep 29, 2013Jamie
Book Club: A Game of Thrones DiscussionSocial Overuse of the Term "Narcissist" and Why It Matters In Raising Healthy Kids