Home > Breastfeeding on House of Cards

Breastfeeding on House of Cards 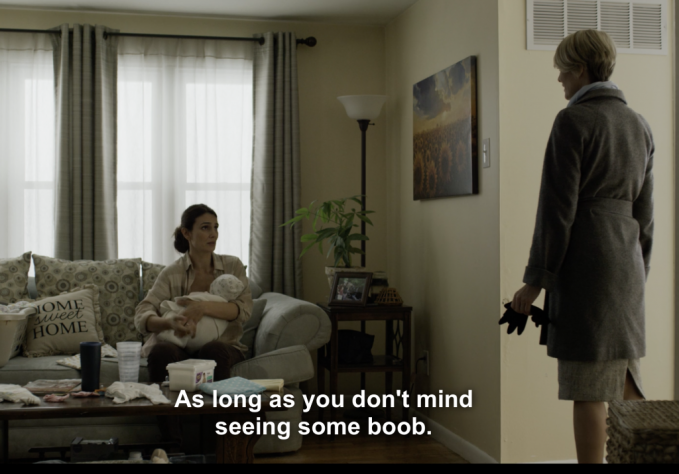 Have you been watching the Netflix season House of Cards? I will say that season 1 was by far the strongest. However, season 2 and season 3 have still been entertaining. I finally finished the last episode of season 3 and now I want to watch season 4 immediately…clearly is has still captured my interest. A few spoilers (nothing too big) below:   They have had some unexpected moments in season 3- anything from Pussy Riot guest appearances to fancy beer pong at the White House. But the oddest moment for me was probably the scene where Claire Underwood goes into a home of a stranger with a baby. Claire is having a bit of an existential crisis in season 3 and is working it all out through the issues and revelations of others during the season. Anyway, the woman who owns the house has a baby and needs to breastfeed, so Claire makes the Secret Service agent move out of the room. Claire stays and listens to this woman give a really honest and terrible confession about her darkest fear and fantasy: to smother her baby and start fresh, away from a cheating husband and all the other problems keeping her attached to her miserable life. Of course, this is all cleverly interwoven symbolism representing things happening in Claire’s own life, and there probably is a little foreshadowing regarding Claire’s next moves in season 4. I can always count on House of Cards to give me subtle (and at times not so subtle) disturbing content, so it was no surprise that something dark was coming when we saw that there is a scene with a mother and baby involved.

Mar 11, 2015Jamie
Honest Trailer of CinderellaHow are you spending your tax refund?