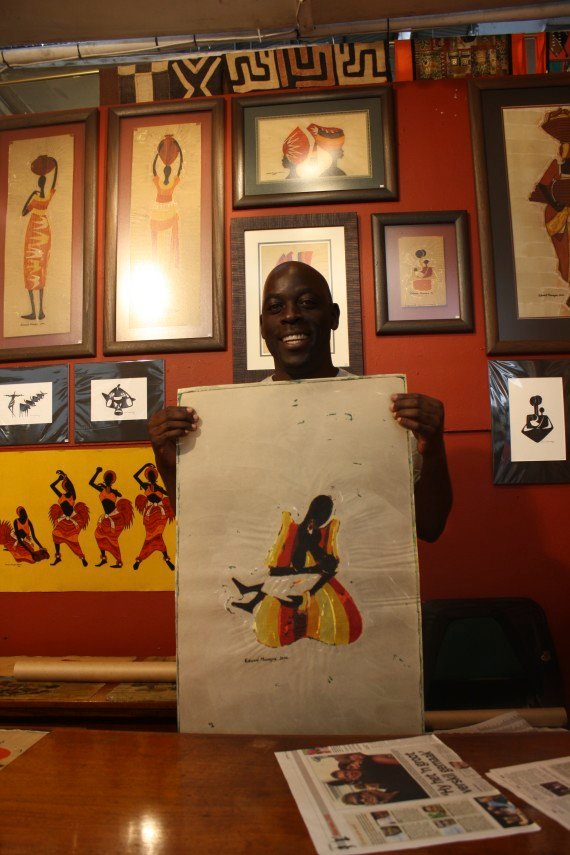 The artist of this breastfeeding piece holding up his work. This piece of art was also my birthday present from my in-laws.

When visiting any country, I am always curious about the cultural differences regarding child-rearing practices and the attitude towards breastfeeding compared to the US.

South Africa is an interesting country because it can be viewed in many areas as Western, with a lot of European influence, but there are so many different cultures and subcultures in the country that the viewpoints of the people living within the borders of South Africa are vastly different.

I think that the idea of breastfeeding in South Africa has an interesting history because it seems like it was normalized and then Western influence changed a lot of opinions (just like the US). It is now coming around again to the idea of breastfeeding past infancy being “normal”. That said, there are some cultures in the country that have never swayed from the idea of child-led weaning and this is old news to them.

A South African TV show, Carte Blanche, invited me to discuss attachment parenting and breastfeeding in their show. I had heard wonderful things about the show prior to agreeing, so I felt they would probably do a decent job with an interview. I was half awake and unprepared when they arrived, so if it does come out a bit lame, it would be right to blame me and not the editor for a boring and unintelligible segment.

Nevertheless, my experience with the show itself was very positive.  They had me clarify certain statements in a way that I knew they were “on my side”. Derek Watts, at one point, said he was surprised at how neutral my opinion was on the topic of others’ parenting styles, but then added that he thought my advocacy for normalizing this style of parenting was much more appealing that way. That is the point I hope comes across when it does air.

An hour before they met us for the interview, we were in Huntington, South Africa visiting Henna Pre-School. I had the pleasure of meeting one of the women working there and discussing what life was like in the area for a working mother. She carried her baby on her back and she explained to me, with great joy, how it was important for her to bring her baby to work. She explained that it was important during this time of her son’s life for him to be close to her, and it was important for her to raise him. She also said that it made breastfeeding very easy. I asked her how long she planned on breastfeeding and she said, “Oh, at least a year and six months.” When I asked her if women breastfeed for longer she said, “Yes, if they are patient!” That was when the head of the community project, Thembi, told me she breastfed each one of her children for at least two years and her own mother breastfed her until she was about four years old. She added, “And we do it in public! There is no hiding to feed your children around here.” 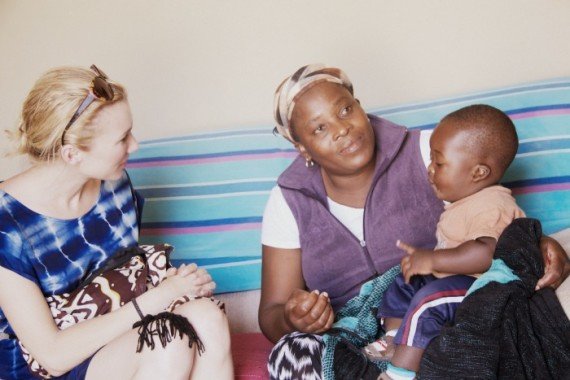 I had a chance to interview people from other cities and villages. The ideas of breastfeeding and average length of breastfeeding were different every place I went in the country. It seemed that about a year was the average, and certain places with a lot of European influence thought going beyond that was strange, while there were other areas where “extended” and communal breastfeeding was accepted and not unusual.

I guess there are a lot of similarities with the States, however, South African views on different child-rearing practices were alternately  more progressive and less accepting  – which just reaffirms that there is not culture that has figured it all out. We must use what we see working and helping people thrive. We must also be an integral part of our global community and share what we know is working for us with others. This way, we will see true progress in our own lives and our communities.

Mar 19, 2013Jamie
My Birthday in Cape TownWhy Home Massages May Be a Romance Killer