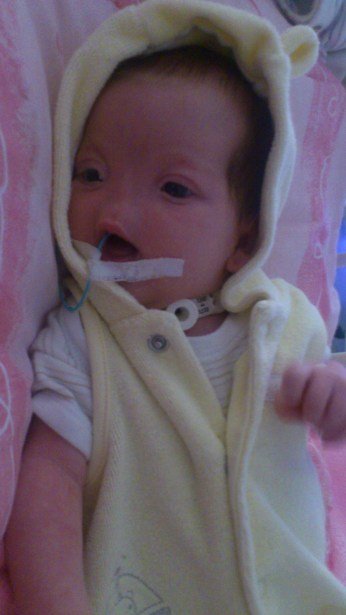 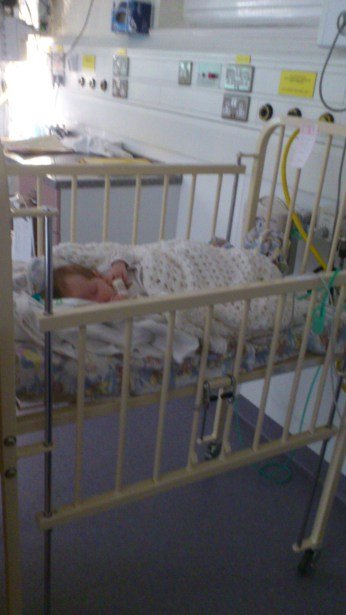 So in a corner of a busy intensive care unit with babies being kept alive on machines and IV’s my baby girl slept in a cot and her mumma attended her every need throughout most of the day.

Skin to skin, or kangaroo care, which studies have proven to help babies thrive by reducing stress and helping regulate temperature and heart-rate, not to mention increase milk supply, was never encouraged. Actually if I’m honest, it was actively discouraged. In fact, despite a shelf full of leaflets purporting its benefits in the family room, during my 5 week stay I did not witness a single act of skin-to-skin.

My own attempts were awkward and half-hearted as staff made their feelings clear.  “MINIMAL HANDLING RECOMMENDED” was written in her notes. This was due to her supposedly not “tolerating her feeds” and the belief that “handling” her would cause her to vomit more than she already was. I was incensed by this and, over the course of the next weeks, gradually fought (when I had both the mental and physical strength to) for more and more contact with my baby, until I was in charge of nearly all her day-to-day care. I learned how to tube feed her, how to suction her trachy, changed all her nappies, and I expressed day and night.

Although a healthy, if not huge, 6lb6oz at birth, her rocky start and having had surgery, meant T was slow to put much weight on. I was asked, repeatedly, to consent to high calorie fortifier, (which had actually been given in her first week without my knowledge or consent until I discovered it and quickly and vocally made my displeasure known. I had been clear that nothing but breast milk be given and this was a major violation for me). I wanted absolutely no foreign protein in her diet and was trying to remain confident that my milk was sufficient just as it had been for my other two babies.

Then there was her terrible reflux or ‘not tolerating feeds’ as they put it. Their solution was to add thickener and again I had to deny permission on several occasions and to several different medical professionals. I felt if they would only allow her to feed upright, rather than flat on her back, (as per hospital policy) that maybe, just maybe, she wouldn’t throw up quite so often. They also wanted her on three hourly feeds but this meant bigger volumes and a higher likelihood of vomiting. When I explained that my previous breastfed babies would have fed more often than every three hours in their first month I was told that it “was not sustainable no matter how good a mother you are.”

The hospital stay was grueling and I was being worn down by the pressure and stress of everything and my confidence in myself was waning. I still broke down when I let thoughts of what the future might hold for us, creep in. I still cried every night when she wasn’t with me. I couldn’t stop my tears when I was told of her multiple eye conditions and that she had little hope of ever seeing out of her left eye. It was a lot for anyone to cope with and I was barely hanging on. 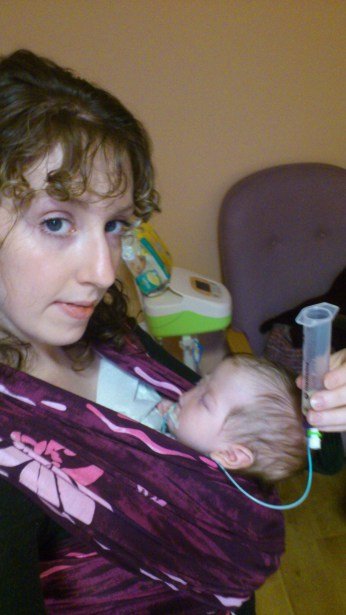 After weeks of frustration and sporadic successful short feeds at the breast, one consultant declared that “T’s feeding was what was keeping her in hospital”. I had to make a choice and by this stage we needed out of hospital so badly that I switched all my efforts from trying to get breastfeeding established to simply getting her weight up sufficiently to get her discharged. I insisted on tube feeding her in an upright position on my knee and held her up for hours afterwards to keep her milk down. Even feeding her in a wrap on occasion. It worked and her weight gain improved -proving that neither fortifier or thickener had ever been truly necessary and finally after 5 weeks in ICU, we were going home. I was terrified. And happy …but mostly terrified.

Getting T home to her big brother and sister was a truly beautiful moment for me. To finally have my babies all in the same place was a powerful tonic. T was finally where she belonged; Home. I felt the pressure of the hospital slowly begin to lift. 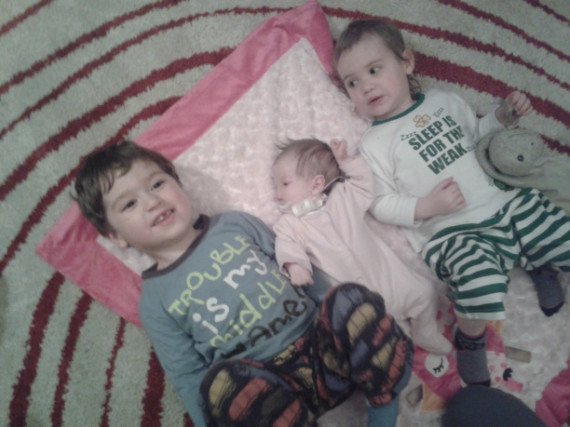 Together at last, my three beautiful babies.

I struggled through 4 days and nights of truly exhausting tube feeding at home. It went against every motherly instinct I had, and now free of the hospital, I was beginning to regain some of my lost confidence.  It required so much effort and watching her arch and cry in pain as soon as the milk began to flow down the tube was wearing away at my soul a little at a time until finally, on the 4th night at home, after T had just thrown up an entire feed that had taken me nearly an hour to administer, I had had ENOUGH.

Continue this story…. (Go back to page one)(Continue to page 3)