Home > Being Present as a Mother

Being Present as a Mother 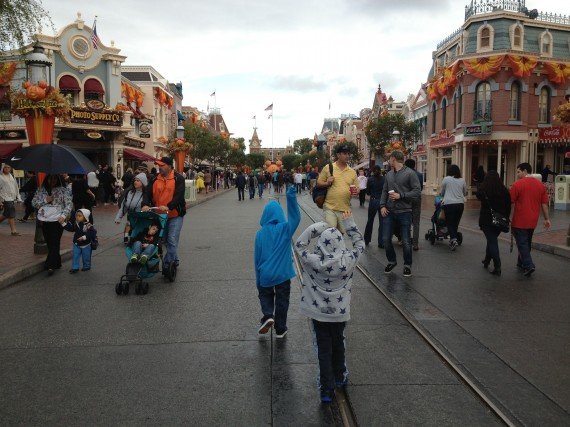 You know what I hate? When you have to see something someone else is going through before you put things into perspective and appreciate what you have.

Yesterday I took the kids to Disneyland for a few hours of fun. I was sidetracked by other work I was attending to during the day (I received 15 calls in 10 minutes at one point) and was not being present with the boys.

To make matters worse it was raining pretty significantly by the time we got there. I was going through the motions of being attentive, but not enjoying the day or, more importantly, my kids.

Samuel was talking to a little boy around 7 years old next to us when he tapped me to say, “Mom! His family is like ours! Beige and brown! His daddy is brown and his mommy is beige.” Samuel looked over at the family and had a more curious and somber look on his face. I turned to the family and realized the mother was sitting in a wheelchair with a scarf around her bald head.

Samuel and Aram were still chatting with their new friend when the family introduced themselves as our children played together. The boy’s mother had cancer, and normally I’m able to stay positive about treatments, or keep myself emotionally out of situations I can’t help, but I couldn’t this time. She is in a state where she does not have much time to live, and they were taking their son to Disneyland as a way to get his mind off of the fact he was going to lose his mom. It also was going to be the last trip they took as a family.

Brian’s mom died of cancer when he was 8. A few months before she died they took Brian and his brother to Disney World. Brian remembers that trip so well, and talks about it all the time. The memory is really important and special to him; it was one of the last happy memories he has of his family when his mom was sick.

I was thinking of Brian’s story as I heard of an almost identical story in this family. We eventually said our goodbyes and as I was walking away from the family, I lost it. My kids will probably put this in the record books as the worst trip to Disneyland- Ever: it was raining, their mom wasn’t being present, now feeling totally guilty for it, but was bawling audibly at the happiest place on earth. My kids hate it when I cry- I hated it when my mom cried, but I couldn’t help it. Aram looked really upset. “Mommy… why are you crying?”  To make matters worse, I had to decide what to tell them. Should I lie for their sake and say I had something in my eye? No, I was already feeling guilty, no need to feel worse knowing I lied to my kids. I told them the truth and hoped for the best: “Mommy is sad because that little boy’s mommy is very sick.” Samuel was already concerned about the mom before I said anything was wrong, but now he was really looking worried. “Will they take her to the doctor and make her all better?” Ugh, this is hard…. “I’m not sure if she will get all better buddy, she’s really sick.” Samuel and Aram both were silently and intensely staring at me as I explained this, holding on to every word with concern for the family they just met.

It was such a learning lesson to watch my boys, sitting still (for once), listening and asking questions with such empathy one would assume they knew these people their whole life, and realize I was wasting an entire day with them. They have a mother, ME! It took that moment to make me realize having a mother and being a mother is not something to take for granted. We always hear life is precious and fragile, but I don’t think we are aware of the reality of life on a daily basis. Perhaps it is a defense mechanism: our minds keep us out of dark places so we can move through daily activities with ease. However, when those moments open up and we see life for what it is, we need to take the opportunity to learn from it.

Author Toni Morrison was on Oprah years ago, way before I had kids. Her words from that show came flooding back to me this day. As mothers, we have the power to make our children feel important, confident, and loved. We do that by being present in the moment. By the sheer expression of our face, Toni eloquently explains, our face expresses what is in our heart. She asks all of us when our child enters a room, “does your face light up?” She elaborated in another interview the moment when her young son brought her a picture he drew and she didn’t really look at it well because she was busy with “I don’t even remember, something I felt at the time was important.”  He watched her reaction and without saying anything he stood there and ripped up the picture. She turned and asked him why he did it and he made a comment explaining why he had done so that broke her heart, because she knew it had made him feel insignificant compared to whatever she was working on. That is when she realized her attention was one of the most important things she could give her children.

Validation and approval are important to our kids. They need to know they are heard and we are present. Life gets chaotic and it is hard to do sometimes, but we need to make a conscious effort for our kids to not slip into a habit of physically being there, but not actually being present in their lives. They are so important and this is a crucial time in their life where they need to be lead on a path of confidence knowing they have a voice that will be heard, and their words are being expressed well and enjoyed.

Next time you see your kids in the morning make sure you, “Let your face say what your heart feels.”