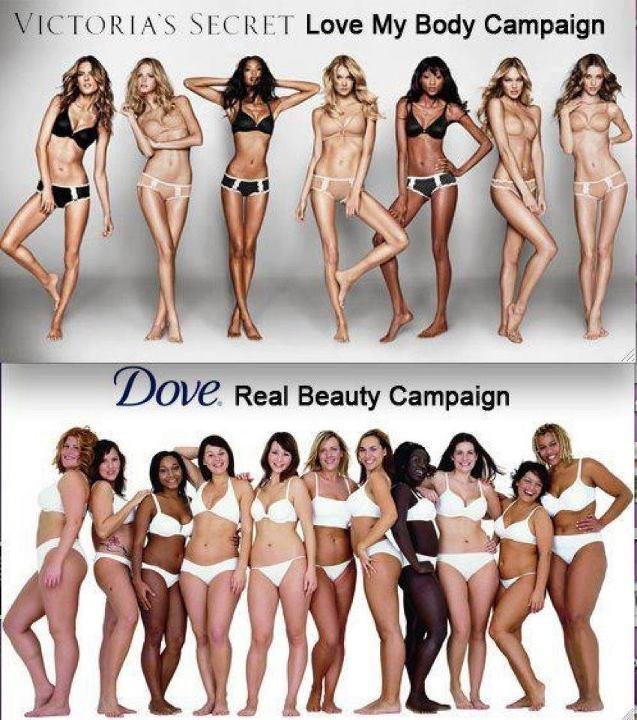 This meme has been circulating on the internet for awhile now. 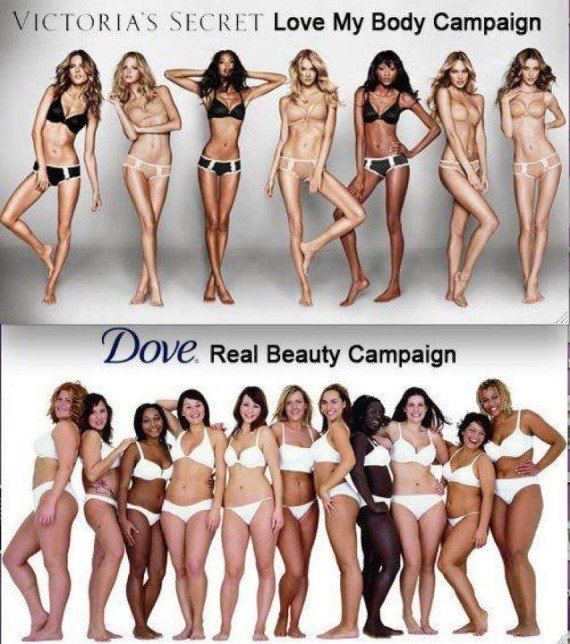 Most of the people who share it are siding with the Dove campaign and say something negative about the Victoria’s Secret ad. Occasionally, it will be the other way around.

I find the meme and comments for or against either row of women completely degrading to every woman pictured, and women, in general. No matter how this meme is presented, the focus is always negative.

By putting these two images together it is read like this:

Top row: “Our culture says you are beautiful, so I’m going to declare you are not.”

Bottom row: “Our culture says you are not beautiful, so I’m going to boldly point that out that no one else thinks you’re beautiful, and then declare that you are.”

Victoria’s Secret is trying to use cultural ideals of beauty (along with a long list of other marketing tactics) to sell their products.

Dove understands that the general public knows the average marketing tactics now and attempts to use reverse psychology. They are using women all slightly under the national average size to target people with a “real” campaign. By choosing women all about the same size, which is larger than the average woman one would see in American ads, they are hoping you will believe they are helping change the perception of beauty in our culture…so you will buy their products. Whether or not this has a positive impact on our culture does not detract from the fact that they are a for-profit company that wanted to come up with a campaign to help sell their product. If they were legitimately attempting to take a sample of woman in the US who vary in physical appearance, there would be a much wider range of shapes and sizes in their ads.

I have nothing against either of these companies products,  I use them daily, but the reaction to their marketing campaigns by the public has made me very sad.

We are so caught up on image that we have forgotten that, in general, size or image is not an indicator of health. We have seen, time and time again, formulas that take into account weight and height but are not conducive to discovering the overall health of a patient. For example, the BMI formula can label a person as underweight who in reality has the same health concerns as an overweight person, but their physical size indicates they would have an entirely different list of health concerns. There is much more to health than just appearance and the numbers on a scale. 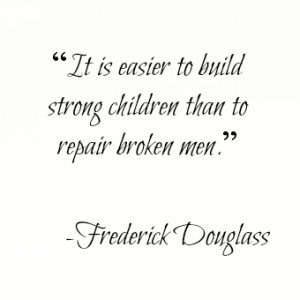 Most of us would agree we would like our children to be in the mindset of health before image. We can change  the future by directing the attention away from image and to health. We do this not only by our words, but by example. We know children and all young primates learn by example.This is why I feel it is so important to start embracing the concept of health before image. It will be harder for us to embrace this idea than it will be for our children, but it seems important that, in order for this to be taught properly, we also accept this as truth and live it.

Don’t get me wrong, I do not believe there is anything  damaging about embracing cultural or personal views of beauty on a healthy level. Appreciating something or someone as aesthetically pleasing is normal. Working towards making yourself feel what you would consider attractive is also normal, to a certain extent. However, the way we are taught to view body and image in American culture is often the cause of much damage to how we view our own image and others. What I am attempting to do is give you another perspective about beauty and image.

One day, it is my hope that we will be able to see the value in our bodies, and value in our health over our image. I also hope we can embrace our own ideas of beauty- outward beauty, while also not having it define us. Our own physical appearance can change in an instant. If we are relying on what we look like, if that is where we are putting our self-worth, then, regardless of our life circumstances, we are going to always fall short and be terribly disappointed.

As living beings, we are in a constant state of evolution. We are going to age and our looks will constantly change. They should; we need to embrace each step of life and be able to see the beauty, different kinds of beauty, at each stage of life. Take it as it comes without any expectations.

We also can have out outward appearance change due to disease or injury. Some of you may recall the story of Jacqui Saburido, a woman who, by Western standards, was considered very beautiful. In an instant, her life changed when one night her car was struck by a drunk driver. She was severely burned in the accident, but she miraculously defeated death. Jacqui had to wake up with what some in our culture would consider an even worse horror to death- her appearance  was completely changed, and frightened most people who encountered her. 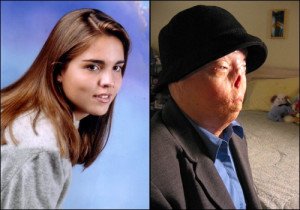 Jacqui before and after the accident.

As humans, we have a defense mechanism to be afraid of what we don’t understand; it is primal. Anyone who looks so much different from others is scary to us because our brain is signaling that we don’t understand what we are viewing, therefore what we see may hurt us; our brain is saying,  “Proceed with caution”. We are living in an age where we know, especially in seeing people with disabilities or injuries, that this isn’t true anymore, but that instinct to fear is still there. We can use our higher conscience to get through it. Unfortunately, I also think that our instinct mixed with our cultural perceptions of beauty have created problems for anyone who falls out of the norm in terms of appearance.

Jacqui not only can teach us more about ourselves by the way we have reacted to her, but we can learn from her by example. She is open about how her injuries impede her daily routine (the injury to her arms and eyes cause problems and have discouraged her from wanting to continue with school) but her physical appearance alone has an entirely different set of social issues. Jacqui says that in her dreams, she is “whole”. In her mind she still sees herself as she was before the accident, so when people look at her it is confusing because she is, in fact, the same person. She is open about suffering from depression since the accident, but also admits she still thinks she is beautiful. Her willingness to open up about what she is currently struggling with, as well as what she knows is true, is admirable.

This post isn’t meant to be a message about ignoring outward beauty and embracing inner beauty. (Although, I believe our inner character/soul is worth vastly more than this vessel we are currently inhabiting.) I understand the joy in embracing certain cultural norms that have a positive effect on ourselves and others. I just want to emphasize that while I understand the recreational fun of working on one’s outward appearance, I also understand how unhealthy it can be when it is valued as a significant part of who we are. We need to keep the mindset that if our appearance as we know it today is taken from us tomorrow, we will still be whole, we can continue to thrive. I believe that to be the healthiest view we can have of appearance.

That is why I hope in the future we will be able to continue forward past the messages like the meme that inspired this post. Perhaps, one day, working towards the health of the individual will be considered beautiful and culturally acceptable. Striving towards health (and it looks different on everyone) is attractive. I pray one day Jacqui will not need to be bothered with the thought of her appearance, but be able to put all of her energy into working towards a goal of finding a solution to live comfortably, stress free, and thrive with her arms and eyesight now different than it was before her accident. It is wrong that our obsession with image has laid this extra burden on her, and it is very real.

So, the next time you see something trying to pit women and various different physical appearances against each other, remember to bring the most relevant point to the discussion-health and well-being.

Jan 22, 2013Jamie
Racism: Our Progress and Our ProblemsAccounting Homework Help The Best Solution