Home > The baby born “in the caul”: What IFLS got wrong about this image

The baby born “in the caul”: What IFLS got wrong about this image 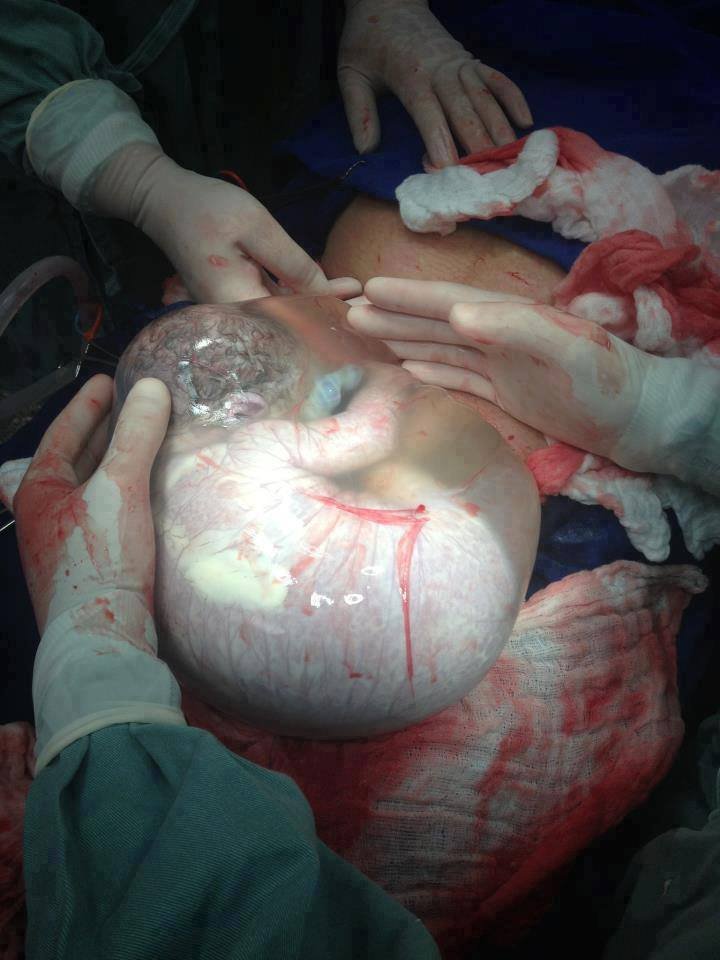 This image is getting passed around on Facebook again, and I thought I’d take the opportunity to talk a bit about what’s going on, here.

This image was posted on social media in 2013 by Dr. Aris Tsigris, after the baby was born via cesarean section. When babies are born with either one or both of the amniotic membranes (there are actually two layers) in tact, it is called being born “in the caul” or en caul respectively. Luckily, this phenomenon is rare, because you can imagine the confusion when a baby born en caul is caught by the “on call” physician! (Thank you, I’ll be here all week. Tip your servers!)

(Despite what you have seen in movies, rupture of membranes before onset of labor, a.k.a. PROM, only occurs between 10-15% of pregnancies.)

Most of the time the membranes are broken over the course of labor. Therefore, caul births are pretty rare, though it is difficult to determine how rare. It is much rarer for highly medicalized births due to common practices such as membrane sweeps and use of augmentative drugs such as Pitocin. Thus, Dr. Tsigris reported that his “veil birth“ experience left him breathless (or speechless, depending on how you translate) and said the baby behaved as if it hadn’t even noticed that it had been born.

He noted that there was no reason to worry that the baby would drown in the amniotic fluid or not be able to breathe, because the infant was still receiving oxygen and nutrients from the placenta. However, I F***ing Love Science reported that this would continue “until the amniotic sac breaks,” which is slightly inaccurate. 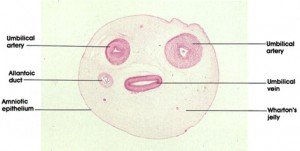 A cross-section of an umbilical cord. Yes, they all look like smiley faces.

…You see, when a baby is born vaginally, the baby’s lungs are compressed in the birth canal, squeezing out all of the excess fluid. Then, the sudden exposure to cooler air upon birth causes the baby to gasp, initiating breathing as well as a whole new system of circulation designed for the outside world.

Part of this process also involves the umbilical cord. The cord contains a jelly-like substance called Wharton’s jelly, which keeps it from collapsing and protects it when it gets tied in knots, for example. This substance reacts to the cooler temperatures, too. If left unclamped, the Wharton’s jelly reacts chemically to the change in temperature, collapsing the blood vessels in the cord. First it collapses the arteries to prevent blood from going away from the baby. Then it closes the vein, after all or most of the blood in the placenta (up to 1/3 of the infant’s total blood supply) has transferred back to the baby. 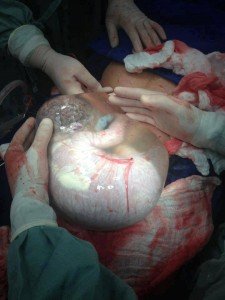 But this process occurs over the course of about 10-15 minutes. So once Dr. Tsigris broke the membranes (this is assumption; I have no idea what happened after this photo was taken), the baby would not be cut off from the mother’s blood supply suddenly, but rather slowly, over the course of several minutes. The transition to life “on the outside” would be gradual. This process may start before the rupture of the membranes, since the membranes are located outside of the mothers body in this situation. However, one of the purposes that the amniotic sac serves for the fetus is temperature regulation. The temperature would indeed begin to decrease, albeit more slowly than if exposed to the air outside.

In case you’re wondering, yes — this does make some midwives and physicians question the common practice of immediate cord clamping. (In fact, most out-of-hospital midwives don’t bother much with the cord and choose instead to focus on initiation of breathing and breastfeeding.) Preliminary research in this area suggests that delaying cord clamping for even 30 seconds can reduce the infants risk of anemia, transfusions, low blood pressure, hypovolemic shock, seizure, intraventricular haemorrhage — all with no statistically significant risks to mother or baby. Most of the research on delayed cord clamping focuses on preterm infants, but researchers have noted that there’s no reason to think that the benefits of delaying cord clamping would not be extended to term infants as well.

Dr. Tsigris’ Facebook page may also be worth a visit, as it features loads of beautiful images of pregnancy, birth, and babies, including this sequence of images of an underwater birth in the caul, another amazing underwater caul birth, and this beautiful drawing of a mother and baby bonding.