Home > The Birth Story of Ella

The Birth Story of Ella I sat there on the cold concrete ground, in a pool of blood that was growing bigger by the second, feeling completely numb from the waist down, just staring at my 8.5-month pregnant stomach wondering if my beloved baby girl inside was still alive. 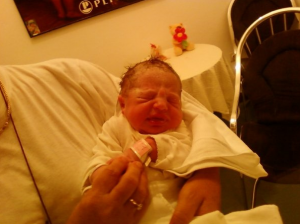 Five minutes earlier I was upstairs playing with my 11.5-month old son while my husband was taking a shower and the sweet little girl in my womb, due for birth in just 2 weeks, was practicing her nightly kickbox routine. It was 8pm on a weekday, and my mother-in-law called from next door saying that the pizza she was baking was done. I put my son in his playpen, opened the door of my house (which is strangely situated up 3 flights of stairs between the second and third floors) and contemplated for a second: should I go downstairs barefoot or put flip-flops on? Stupidly, I chose flip-flops that had absolutely no grip on the bottom. I took my first step down the concrete stairs in front of our door and immediately slipped. My husband hadn’t yet put up a handrail, so after going down two or three steps, I fell off the side of that 3rd flight of stairs down to the 2nd flight of stairs where after some tumbling I somehow managed to grasp the edge of one of the concrete steps with my swollen pregnant fingers. I held on for dear life, long enough for you to say one Mississippi, and then my fingers let go, no longer able to hold up my now 190 pound pregnant body. I plummeted straight down, landing hard on my buttocks on the concrete ground next to the base of the stairs.

I was in the sitting position, my legs lay flat in front of me, everything from the waist down numb. I was completely unable to move, fearing in that moment that my baby was dead and that I would spend the rest of my life in a wheelchair. My tummy, which was hard just minutes earlier from my baby’s movements, was completely soft and lifeless. I started screaming for my husband… over and over again. I thought that he probably couldn’t hear me since he was in the shower. I screamed for my father-in-law. I screamed for my mother-in-law. I screamed for my brother-in-law. As I sat there screaming out people’s names, hoping someone would hear me and come, I stared down at my legs and at the pool of blood and clear liquid, which wouldn’t stop growing. 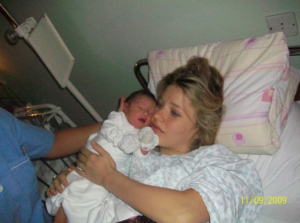 Finally, my husband came running down completely naked, soap all over his body. At the same time, my father-in-law came running over. Apparently, I screamed so loud that even the neighbors a fence over heard me from inside their house and came rushing. My husband called 911, and then he and my father-in-law picked me up a couple inches off the ground and held me above the ground so that I wasn’t sitting on the cold concrete. While we waited for the ambulance to come, I decided to see if I could flex my toe. Success! I should have been excited to realize that I wasn’t going to spend the rest of my life in a wheelchair, but I wasn’t. I was too sad to rejoice because all I could think about was if my baby was alive.

The ambulance came within 7 minutes. The longest 7 minutes of my life. They laid me on one of those boards and put my neck in a neck brace. As we made our way to the hospital and I listened to the sirens the vehicle was making, I thought about my baby and my homeland America and how if I had lived in America this probably wouldn’t have happened… because where in America can you find stairs without a handrail? I lay there, in the Croatian ambulance, making my way to the Croatian hospital, praying my baby would make any kind of movement. But nothing. My stomach was like Jell-O. I asked the doctor sitting next to me in the ambulance if my baby was OK. She wouldn’t answer me, obviously because she didn’t know herself. When I got to the hospital, everyone in the gynecological ward was expecting me.

After countless x-rays, I was told I had a broken pubic bone. I didn’t care – I was happy to be alive. Next, my husband, and the head gyno Dr. A, and I made our way to the ultrasound room. The personnel in the hospital had removed my yoga pants with scissors, and I lay there naked from the waist down. My husband was at my feet staring at me. He later told me that at that moment he saw that my ‘female parts’ looked like 2 huge male fists – colored black. I thought he was exaggerating, but other personnel in the hospital later told me the same thing. This is probably why I couldn’t feel anything around my pelvic area.

Dr.A took the ultrasound device and placed it on my stomach. On the black and white screen, my baby showed up…. I held my breath… and finally, I saw a heartbeat!!!! I have never felt so relieved in my entire life! Dr.A checked the amount of amniotic fluid and said that everything seemed to be normal. However, because of the extensive ‘damage’ I had down there (read: HUGE wounds to my sensitive female area), I had to go into surgery, and because vaginal birth would not be possible because of my broken pubic bone and because of my vaginal wounds, he would have to perform a c-section.

It was 11:20pm, and I lay on the operating table in the O.R. The on-call gynecologist had showed up by now. The room was full of doctors. It seemed like 10 or 15 people were in there. I looked around, and when I realized what time it was and what day it was (September 10th), I half-jokingly asked in Croatian: “Soooo, is there anyway this baby can be born before midnight? September 11th isn’t exactly the greatest day to have a birthday if you’re American.” The doctors laughed, and said that I shouldn’t worry because the baby would be out by then. Just as they were about to put me to sleep, I looked over at my arm and noticed a huge gash by my elbow that no one had noticed earlier. So, I said “Ummmm… I think my arm needs stitches.” That was the least of their worries but they noted it, put the gas mask on my face, and as I counted backwards from 10, I was out. 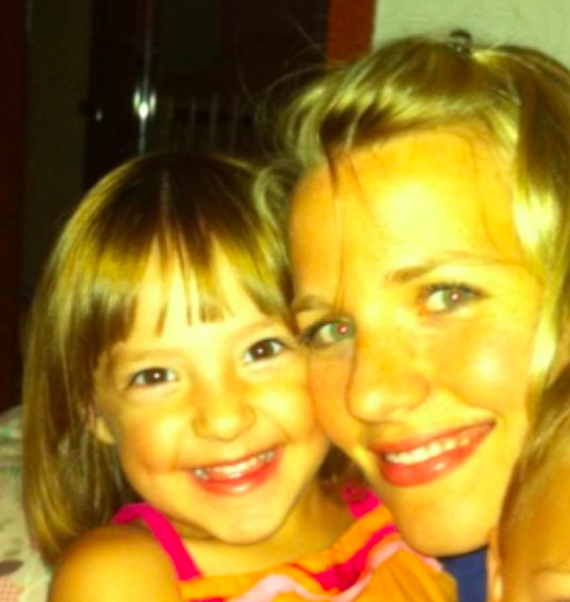 I woke up in the recovery room about 3 hours later. Baby Ella was born at 11:45pm perfectly healthy! She had an Apgar score of 9/10 to prove it. In Croatia, they do rooming-in, even if you’ve just had surgery, so Ella was in her little bassinet next to my bed even though I couldn’t move. The entire surgery took 3 hours, and I had the body to prove it. I had a fresh c-section wound, gashes on both my legs, a broken pubic bone, stitches on my elbow, scrapes on my arms, scratches on my back, was receiving 2 blood transfusions, had what seemed like a million stitches ‘down there’ as well as a long plastic tube that was collecting the blood that was draining out of the 2 male fists ‘down there’ (yes, it really was that swollen)… but I didn’t care. There I lay, alive and breathing, next to my baby, who was alive and breathing as well.

What followed was a painful recovery that took 3 months. It took a couple weeks before my ‘female area’ returned to its normal flesh color, and it took 2 full months before my body absorbed all the stitches ‘down there’. I remember being in the hospital and as the days went by, the nurses would say “It’s better today. It’s not black or blue anymore. It’s green now.”… I never thought I’d be so happy about someone telling me my genitals were going through the colors of the rainbow. My parents flew in from Texas and stayed for 2 months helping me heal. With the help of my amazing husband and my amazing mom, who cooked and cleaned and took care of my baby and her own baby (me), I slowly healed and was even able to successfully breastfeed little Ella from day one! I wasn’t able to walk normally (standing straight up without being hunched over) for a looooong time (almost 3 months). I wasn’t even able to roll over in bed onto my side or get out of bed without assistance for over a month. But I managed to heal. Today, other than a couple scars on my legs and arms, there are no traces of the accident. Some people might be wondering what happened with the 2 male fists – thankfully, I can say that the ‘female area’ is 100% back to normal. In fact, you would never know anything had happened unless you looked at my medical file. 😉

I went on to recently have another baby (by planned c-section since I am no longer able to give birth naturally because of the once-broken pelvic bone), and when I was in the hospital again, all of the staff recognized me. I am now known as THAT girl, the one that fell when she was 8.5 months pregnant.

Lessons learned: Be thankful for everyday you have with your beloved ones – you never know if it’ll be your last. Also, the power of the female womb is incredible – it is absolutely astonishing that baby Ella was completely unharmed (I remember my gyno, Dr.Z, telling me the next day in the hospital that I should go say a prayer because the baby being alive was a medical miracle). Last but not least, if you’re pregnant, avoid stairwells that have no handrail. And stay away from slippery flip-flops. 🙂 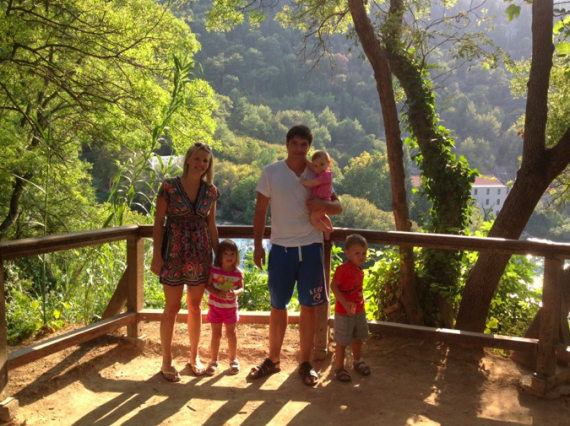 This guest post was written by Mila. Mila is a 28-year old American woman living in Croatia with her Croatian husband and their 3 children. She writes a blog at www.tacklingmommyhood.com.

Oct 26, 2012Jamie
i think my macbook is working for the paparazziCarmel-by-the-Sea