Home > Attachment and Independence – different sides of the same coin

Attachment and Independence – different sides of the same coin

And here we are. Down to the last days of summer, which for me means a turmoil of angst, packing, and insomnia. It’s cool here in NY this morning, and I want to scream, “No! I don’t want it to be cool, a reminder autumn is just around the corner. I want it to be hot and sunny, and lie on the beach pretending I never have to leave!” Last week I was still doing just that, got on the train with Flower Child and spent the day in Brooklyn.

When my children were young, I practiced attachment parenting, mostly.  I used a midwife, breastfed, made my own baby food, carried them in pouches on my chest and slings on my hip. There are many facets and ideas behind it that might draw someone to attachment parent, and the one I’m thinking about this morning is the idea that children who are raised this way grow to be more independent, more secure. As an older parent now, with older children, do I believe this is Truth?  Maybe; it worked for us, but there are so many factors involved in raising children, so many variables, I don’t believe there is a one size fits all approach.

Man Child is preparing to go back to school.  He’s entering his second year in a small, private liberal arts college, and his head and heart are ready, if his suitcases aren’t. This is our sixth year of helping him pack up and leave for school. He attended a small private, boarding school for high school. Seems like the antithesis of attachment parenting, doesn’t it? Maybe, maybe not. Boarding school was his idea, supported by the staff at his middle school. He earned a full scholarship to attend, and did well there; successful academically, grew as a person, made friends, connected with teachers, and came home frequently for both long breaks and quick weekend visits.  The school wasn’t that far away, so it was an easy drive–if you weren’t trying to get there or back through the hell that is the Lincoln Tunnel on a Friday–or he could and often did take the train.

Originally, I was vehemently opposed to the idea of boarding school.  Not my kid, uh-uh-no-way. First of all, I like my kid, why would I support him leaving the house 4 years earlier than I “had” to? Second, boarding school, what the heck is that? Is that the new politically correct term for jeuvie?  He’s a good kid and a good person, spent hours each week serving food to the homeless beginning when he was 12 because it hurt him to see people hungry on the street. We were (and are) a close family, wouldn’t boarding school destroy that bond? Then there was the cousin of not-my-kid, you know, my-kid-would-never. I don’t believe in my-kid-would-never, some kids might be more or less likely, but every kid, given the right/wrong circumstances– can make mistakes, show poor judgement, or be caught up in something before they know they’re caught.

But. He campaigned, and eventually, I promised to keep an open mind. 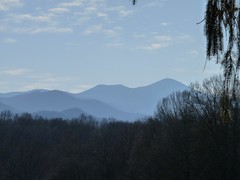 Which meant listening to the teachers and staff at his middle school, when they talked about supporting opportunities, the safety of boarding schools as opposed to riding the subways each day, the endowments available for scholarship monies, the beauty, the support of teachers and staff who actually live with the kids, and on and on. So we went to look, he interviewed and filled out pages of applications, we both wrote upteen essays. Husband and I were bowled over by the opportunities available, the breadth of courses, the safety, the indescribable beauty and history of the campuses, the people who had attended these schools and the kids who were attending. These were not cold, impersonal places to dump your kid while you jet set around Europe (or some such idea I had from Harold Robbins novels). *This picture is not a school he attended, nor one that we visited, but the beauty is representative of many campuses we’ve seen. *

I was excited for him, I was proud of him–it was his efforts, his hard work, his maturity, and his humanity that opened the way for this opportunity, affording him a choice of schools offering full scholarships when the decisions came in.  Leaving him at school that first day was among the most difficult days I have ever faced as a parent. I cried all the way home.  Husband (who had been even more opposed than I when we first heard the term boarding school) held my hand and reminded me of all the reasons we were doing this, the way I had talked about wishing I had had this type of opportunity, and of course, how soon we would go visit him. I thought it would get easier. Experienced parents told me it would get easier. Wrong. I have cried every year, and every year it got harder, because I knew and know exactly how much I would miss him.

And now, it’s Nerd Child’s turn.  He is leaving in a couple of weeks to attend Hogwarts. Not the same boarding school Man Child attended, but the one that is perfect for him. If my heart broke from having to smile and pack up for one child, it’s absolutely melting doing it for two. Any morning now I’m going to wipe my eyes and find my aorta in the Kleenex.  Nerd Child, how can I let him go? This is the toddler who would wail if I went anywhere without him, trying to stick his little fingers in the crack under the front door so he could reach me.  He isn’t wailing now, he isn’t even visibly nervous. He’s psyched and he’s ready to embrace every opportunity that he can earn, learn from every experience he can have. Like Man Child, he earned this opportunity, was blessed with several acceptances and excellent offers, and he’s headed off with a full scholarship and strong values to help him navigate the pitfalls of high school–cause after all, it’s still high school.

During these anxiety ridden days of preparation I ask myself why I’m doing this.  I have friends who wonder why I’m doing this, even as they’ve seen the positives through Man Child. Believe me, life is easier with the two of them home, they make me laugh, they help with Flower Child, they help with the heavy lifting of life in the city. Because I believe it’s my job as a parent.  To help them see what’s out there, what they can strive for, and how to find and make use of opportunities, so their adult lives will (hopefully) be easier than mine and Husband’s. My kids don’t have a lot of stuff, they know all about living on a tight budget, and they don’t arrive in their dorms with fabulous matching everything and the latest in clothing trends. They arrive with strength, faith, and hope.  I expect them to do the “right” thing because it’s the right thing, even though it’s often the more difficult choice. The least I can do is the same.

*Editing for clarity: Boarding school isn’t right for every kid, nor is it right for every family. For us, it seems to have been the best choice for both boys, I don’t assume the same is true for all.

This post is syndicated from a post originally posted here by Mrs. Fringe. Mrs. Fringe lives in Manhattan with her husband–Husband, three kiddos–Man Child, Nerd Child, and Flower Child, two dogs–Big Senile Dog and Little Incredibly Dumb Dog, and the ever changing live stock in her reef tank.  In between her glamorous life of walking dogs and navigating the cutthroat world of school admissions in NY, she works on her writing and blogging about the world of broke parenting and reefing in NY.