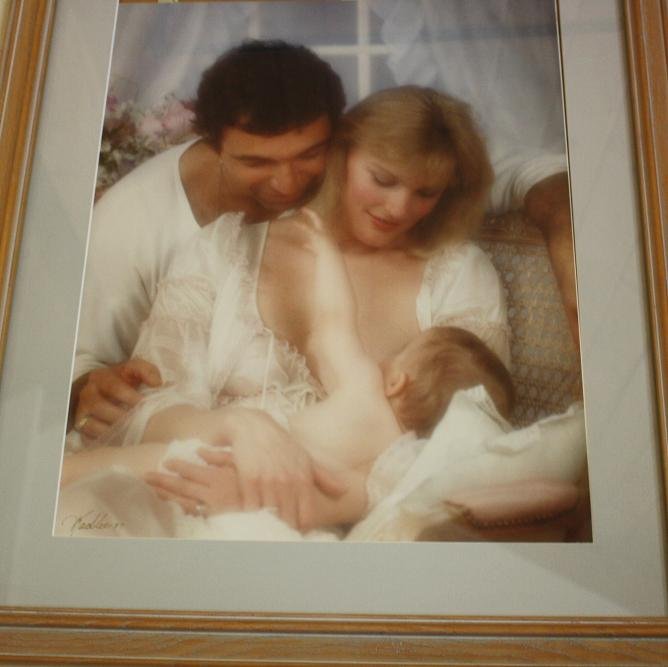 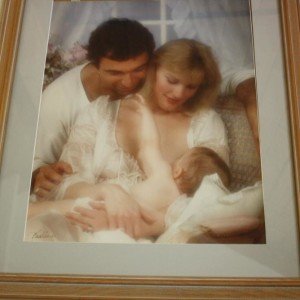 Well, it is a good thing Richardson police didn’t enter my parents house back in 1988. They would have been welcomed with this shot over their fireplace (it is still hanging there btw)… “A cultural thing”? It’s a healthy biological thing.

Back in 2003, in Dallas, Texas, children were taken from their parents because the father had taken a photo of the mother breastfeeding. The technician developing the film contacted local police and that was the start of the investigation.

“With nothing else to support their contention that the photos were related to sex or sexual gratification, the police and the Dallas County District Attorney’s Office presented the photos to a grand jury in January and came away with indictments against Mercado and Fernandez for “sexual performance of a child,” a second-degree felony punishable by up to 20 years in prison. The charges centered on a single photo, the breast-feeding shot.” – Source

The family immigrated to the U.S. from Peru where breastfeeding photos were common, it seems, long before they were in the U.S.:

Victor Jaeger, pastor of the Iglesia Adventista del 7 Dia de Richardson, says, “The community has been very supportive of them. They see it as a big misunderstanding.” About a third of his Spanish-speaking Seventh Day Adventist congregation in blue-collar East Richardson is Peruvian-born. The pastor says he was prepared to testify on the couple’s behalf and explain what appears to him to have been a cultural misunderstanding. Jaeger, who grew up in Peru, says breast-feeding is culturally important in his native country and considered acceptable to do in public, particularly in the country’s jungle regions. “My cousin sent me a picture of her newborn, and it was of the baby being breast-fed,” he says. “As someone who has lived here for 20 years, I asked myself, ‘Why did she send me that picture?’ To her, it was nothing.”’ – Source

The most troubling part of this for me to read, was that breastfeeding was characterized as sexual in the indictment:

Their most pressing problem was the breast-feeding picture, which the indictment characterized as sexual, “to wit; actual lewd exhibition of…a portion of the female breast below the top of the areola, and the said defendant did and then employ, authorize and induce Rodrigo Fernandez, a child younger than 18 years of age, to engage in said sexual conduct and sexual performance.” In other words, says Chatham, the act of simulated breast-feeding, captured on film, was being portrayed as a sex act. “They’re saying the guy who took the picture is a sicko and wanted a photo of this to satisfy his sexual desire.” – Source

The defense used Maria Lactans to prove how breastfeeding is normal and beautiful:

In late February, Chatham drafted a legal motion seeking dismissal of the indictments, using The Lucca Madonna as his star exhibit. “The material at issue falls squarely within the ambit of the First Amendment’s protection,” Chatham wrote in his brief. “The portrayal of the suckling child is found in countless numbers of artwork. Whether the medium is canvas, marble or Kodak film is irrelevant for the purposes of First Amendment protection.” – Source

This couple ended up in severe debt from their experience, and the article ended with the children still not returned to the parents (the good news is they were returned eventually). However, authorities were planning on giving them a lie detector test to prove that their normal view of breastfeeding was, in fact, normal:

“Two weeks ago, with a deadline looming for the state either to return the children or go back to court and ask to remove them permanently, Dallas Assistant District Attorney April Carter asked the judge in the case to require the parents to take the tests and attend the counseling before anyone goes home. “There are concerns we need to address,” says Carter, who is representing CPS in family court. She says the store clerk, the Richardson police, the grand jury and others took issue with the photos and without further proof, “it’s not clear whether this was sexual or cultural.” She says she believes lie-detector tests would put that question to rest.” –Source

This story was unbelievable. Please read the entire article here and let me know your thoughts.

Do you think this could happen today? Is it possible we have made quite a bit of progress in  normalizing breastfeeding? Why or why not?

Aug 7, 2013Jamie
Baby Given Another Mother's Breastmilk in DaycareWhat Not to Say to Parents of Preemie Babies