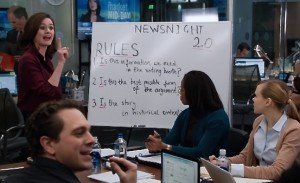 Producer MacKenzie McHale reveals her guidelines for “Newsnight 2.0” on HBO’s The Newsroom

She writes down several questions that she wants the news team to ask themselves as they write a story. For example, “Is this the best possible form of the argument?” And “Is the story in historical context?”

Upon further discussion, they added the question, “Are there really two sides to the story?” This was a reference to what is often called “biased towards fairness,” or “false equivalency.” It is the tendency of news media outlets to present “both sides” of the story and effort to convey fairness, which pleases more viewers. However, in providing the viewers with what they want, they are not providing the viewer with what they need in order to be informed, make voting decisions, et cetera: the truth. Instead, they are presenting two “sides” of a story – as if there were only two, and as if each were equally valid. Obviously, this is not always the case. The example given was that “If the entire Congressional Republican Caucus were to walk into the House and propose a resolution stating that the Earth was flat, the Times would lead with ‘Democrats and Republicans Can’t Agree on Shape of Earth.’” It is quite obvious that there is only one side to that story. Other stories are so complicated that one could not speak merely to two guests with opposing views and expect to accurately convey the whole story.

The “mommy wars” is one such story. Campaigns like the one that Connecticut Working Moms recently put together create the impression of a false equivalency between choices like breastfeeding vs. formula feeding, or tending to your infant’s needs vs. letting them cry it out. Such ideas are in stark contrast to what the research tells us about such issues, and is the very sort of notion that we are trying to dispel from a public health perspective.

Yes, parents do need to support, and not vilify, each other. But this is not the way to accomplish it. These public health issues that are affected by very complex social forces – often many at once – and photos of mothers holding one-sentence signs very seriously oversimplifies them. By ignoring this complexity, we are doing mothers and children a disservice, essentially accomplishing the opposite of what I genuinely believe these campaigns intend to do.

If you really want to end the mommy wars, then you need to do the hard work of campaigning for policy changes that help to build a world where it is normal that:

1. all mothers who wish to breastfeed are able to do so (and that most mothers do, in fact, want to, because they are familiar with the benefits and are comfortable with their bodies) and therefore moms don’t feel guilty about not doing it because it is understood that those who don’t genuinely can’t,

2. all cesarean sections performed in the United States are necessary ones, so moms don’t have to feel guilty about that, either, and

3. evidence-based parenting education is taught in schools so all parents know what children need and how to cope with the stresses of being a parent.

These can be accomplished by policies that establish:

– Paid parental leave in the United States, LIKE EVERY OTHER WESTERN AND/OR REMOTELY WEALTHY COUNTRY HAS.

– That all insurance plans must cover the valiable services of IBCLCs.

– Complete overhaul of the American childbirth system, including but certainly not limited to: expanding the practice of Certified Nurse Midwives in the United States, comprehensively supporting evidence-based obstetric practice in hospitals at ALL levels, and making it mandatory that all hospitals become WHO/UNICEF Baby Friendly certified — Like California did just last year.

– Sex education in schools is evidence-based and includes parenting instruction from an early age. No more lying to kids about how their bodies work, how awful having children is, and putting virginity/purity up on a pedestal at the expense of teaching them about healthy sexual practices.

– End rape culture and improve access and quality of mental health care for sexual assault/abuse victims, so that girls are comfortable with their bodies and don’t feel grossed out or aversion to breastfeeding.

– Quit lying to parents about cosleeping. Fund comprehensive, evidence-based public education campaigns about how to cosleep safely. Frustrated with the failures of state and national governments, the Mother-Baby Behavioral Sleep Laboratory at the University of Notre Dame recently erected an informative website specifically for the public. We could also fund campaigns to reduce smoking (we still haven’t won that battle yet) and obesity among parents (a newer and increasing one) — two major risk-factors for sleep-related deaths in infants.

– Make hitting children illegal and enforce it. And while you’re at it, hold fundamentalist religious parenting book writers such as Michael Pearl (To Train Up a Child) accountable for their dangerous advice on spanking. And again, here is another area where stress is a known factor in influencing parental behavior.

…Finally, I think the best advice came from Tracy Cassels, over at Evolutionary Parenting. She is the only person, so far, that seems to feel the same way I do about this whole “mommy wars,” business. Her advice: Don’t lie about the truth in order to make people feel better about their own guilt. But also, don’t be a jerk about it. (She also says a whole bunch that I’m leaving out here, so I encourage you to go read her post.)

No mom always makes the right choices, and there is a serious problem where they will become plagued with guilt about the choices that are less than optimal. And many, I think, react defensively about it and attempt to justify their choices so that they don’t have to feel the pain of that guilt. No parent should ever have to feel that way. And certainly other mothers shouldn’t go around making them feel this way.

And yet, the Internet – where facial expression and inflection is harder, if not impossible, to convey — seems to make that so easy to do. Perhaps if we, as young adult author and vlogger John Green says, “imagine each other complexly,” we can better understand how each and every mother we encounter is affected by the complex and relentless social forces around them. If we can understand – fully understand — the known effects of socioeconomic status (SES) on almost all parenting behaviors, the well-established affect of stress on parenting at all SES levels, the “booby traps” that continue to keep mothers from meeting their breastfeeding goals, the failures of most obstetricians to provide evidence-based care (see here and here), and the complex and deeply-rooted cultural constructions that support our aversion to breastfeeding in public or sharing a sleeping surface with a child…then maybe, just maybe, we will be able to quit pointing fingers at each other, and at ourselves, and start pointing them at the right people: politicians, the manufacturers of infant products who lobby the politicians and conduct bogus studies, hospital administrators, pediatricians, and obstetricians.

I do think we as a society all bear some responsibilty for our childrens health, but these are the people on whom I tend to come down the hardest. Because they have the ivy league educations that most moms don’t and can therefore be expected to know better. And because of the positions that they hold in society, I believe that they hold the greatest responsibility on an individual level. Almost all of these occupations involved an oath of some kind to place others before themselves, to serve the public. As a person of science who I’d like to think is reasonably well-educated, and most certainly privileged, I hold myself to many of the same principles, and out of respect for these principles I hold others of similar privilege accountable as well.

Jun 4, 2014Jamie
Family Travel To DubrovnikWhat Every Pregnant Woman Should Know About PPCM (It Could Save Your Life)