Home > A professor, a baby, higher education, and changing the world

A professor, a baby, higher education, and changing the world 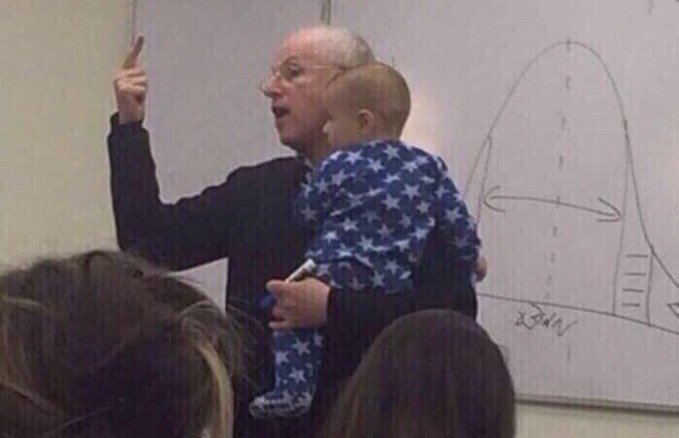 This professor’s student has a kid. One day, the student’s childcare arrangements fell through and she had to bring her little one to class. When he started to fuss, the embarrassed mother hastily made her way to the door. The professor stopped her, took the baby and calmed him, then continued with his lecture. 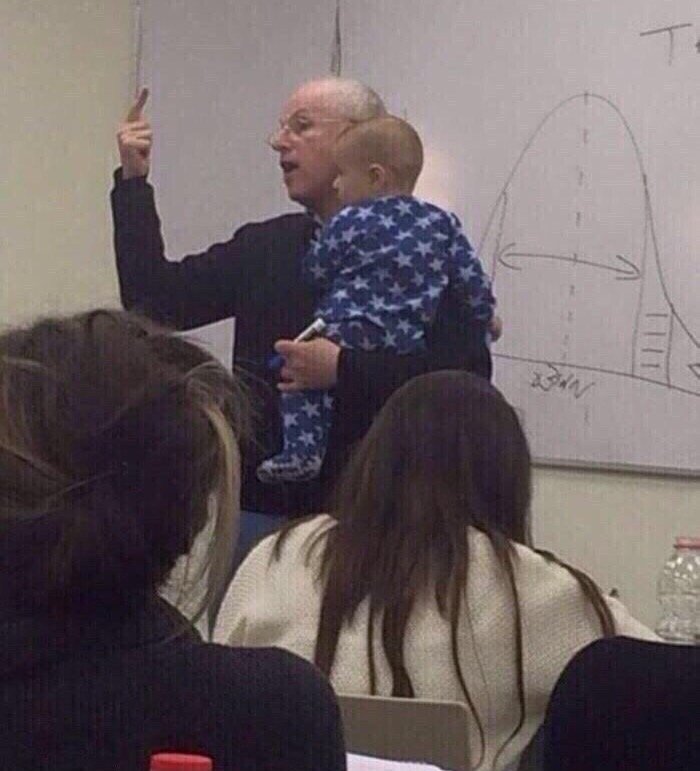 This professor is epic because he understands that the struggles of parent students are REAL. Childcare is expensive in the United States, and so is school. I’ve been in many classes where a student had to bring a child to class and, thankfully, the professors at my particular institution were very understanding.

This photo just says so much to me.

The chalkboard says that this is a statistics class, and that this mommy is gaining some very valuable professional skills. (I really wish people had a better understanding of stats. Including me…)

This photo says that, by holding his student’s baby for a while, this professor is helping her stay in class so she doesn’t miss anything. He’s also fighting cultural practices that perpetuate separation of infants from their primary caregivers.

Chances are, he’s been there himself. The work-life balance struggle doesn’t end after undergrad. In the U.S., 70% of college professors are adjuncts, which means they have no benefits. About 360,000 recent PhD grads (read: child-bearing age) are on freaking food stamps. And there’s been a lot of talk lately about how female professors often pay a “baby penalty” for each child they choose to have.

A lot of this is controlled at the administrative level, and even beyond, and is outside of the control of people at the department level. But at least in my field, Anthropolgy, I feel like there is a bit more understanding on a cultural level. Indeed, I have seen communal childcare arranged at conferences, and — because this is IANtB and I know you’re wondering — yes, I have seen anthropologists breastfeeding at conferences. Uncovered. In the front row, right before their turn to talk. And nobody bats an eye and it is always awesome.

…But I know that, while babies are small and easy to pack, preschoolers are noisy, wiggly, and require their own seat on an airplane. Mom and dad are gonna need tenure to pay for that childcare or that airplane seat. (Professors usually have to move to where their jobs are, so no, grandma and grandpa are probably not around.)

I don’t know how to fix these problems. They’re complicated and I wouldn’t even know where to begin. But I do know that this professor is doing his part, however small, to change the world. I also know that education is one of the best ways to secure a promising future for our children, and we need to find a way. Just look at that baby and you know it’s worth it.

UPDATE: Buzzfeed has discovered that this is professor Sydney Engelberg, a social psychologist at Jerusalem’s Hebrew University. A native of South Africa, Engelberg has five grandchildren and loves kids. He has many graduate students with children and encourages them to bring their babies to class, where they sometimes even breastfeed during class. His daughter told Buzzfeed that her father’s goal is to teach his students that education is about more than just learning facts, but also learning values. He sounds like an amazing person, so definitely head over to Buzzfeed and read the whole scoop on him!

May 13, 2015Jamie
The Lap of Luxury in the Middle of the African BushWhy Healthcare Jobs are On the Rise