Home > A Breastfeeding Story: When you are diagnosed with low supply

A Breastfeeding Story: When you are diagnosed with low supply

Breastfeeding is the hardest thing I have ever chosen to do.  The most natural act is just so…well…un-natural for me.

When my first was born, I was committed to nursing.  While still pregnant, I read books so that I was prepared.  I chose my pediatrician based on the fact that he works side by side with a full time lactation consultant right in his office.  I got myself an expensive pump, bottles that were shaped like the breast, and I was ready to go. 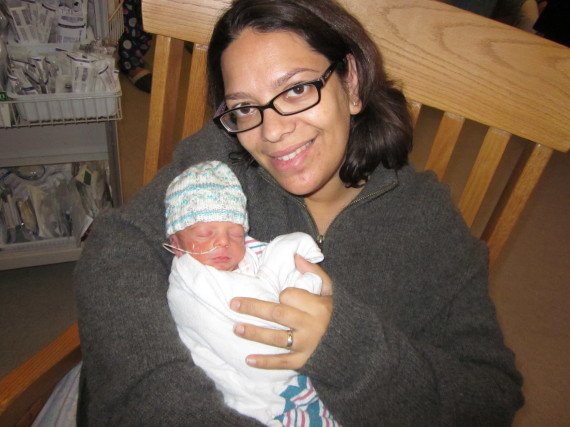 He came into the world on a Tuesday via c-section.  My amniotic fluids were very low and I had already had a round of IV fluids 3 days earlier.  My stubborn little Goofball was happy in his cozy home and had no plans of coming out anytime soon.  I wasn’t dilated.  I wasn’t effaced.  I hadn’t dropped.  I was 40+ weeks and my OB felt that I couldn’t be induced and so a planned c-section was our best bet.  A little disappointed that I wouldn’t be able to nurse immediately after birth, I brushed it off and away we went to become parents.
Three hours later in my hospital room I took little Goofball and latched him on and felt an immediate magical connection.

We started going for weight checks every 48 hours and it was inevitable that he needed to be supplemented.  I started pumping during those few moments when he wasn’t on the breast, but I soon was caught up in an exhausting cycle – breastfeed, bottle feed pumped milk, pump, wash bottles and pump parts.  Rest for all of about 42 seconds. Repeat.  I was defeated, but I kept going.

We continued our weight checks and monitored Goofball, who was also suffering from reflux and would seem to spit up everything I had given him.  He was put on reflux medication and we continued to monitor him.  I remember one particular visit when the lactation consultant commented that he looked hungry, and it’s never good news when a lactation consultant whips out a bottle of formula…which of course he spit up.  So we offered soy formula…which he spit up.  He just wasn’t gaining well at all, and he was labeled as a “failure to thrive.”  We finally got the formula right – a partially digestible formula called Nutramigen which stunk to high heaven and cost more than my monthly car payment.  Lucky for us, our insurance paid for it. 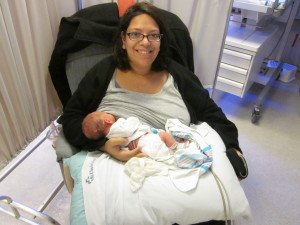 As the weeks went on, Goofball nursed less and less.  I went back to work, and at around 8 months old he started pushing me away.  I was heartbroken.

Two years later, at the pediatric dentist I learned that Goofball had a cleft uvula.  Finally I had answers, but it was too late.

This time around, I told myself that I would not give up no matter what.  When I rubbed my expanding belly I would daydream about having a med-free VBAC (or maybe I’d get that epidural) and I would lay this newborn baby on my chest and nurse him within the first few moments of his life.  I had a plan…and what’s that they say – that Man plans and God laughs?  I suppose that my plan was not meant to be.

At 32 weeks, I dragged my exhausted ass to the doctor and told them that something was seriously wrong.  After a urine test, blood pressure test and non-stress test I was sent to the hospital, and before I knew it, I was knocked out rushed to the operating room.  Within moments, little Mush was born.  Not only did I not get to nurse this baby right away… I didn’t get to see him being born.  I didn’t get to keep him in my room.  I didn’t even get to touch him.

I requested a pump in my room and got to work.  I started pumping every 2 hours and it took me pumping fifteen times…yes I said fifteen times…before I saw one drop of milk.  Before that I had maybe 1 drop of colostrum that the nurse sucked up with a syringe and injected into the inside of baby’s cheek.  In the meantime, Mush was getting high calorie formula put in a feeding tube down his nose so that the formula went directly into his stomach because he was too weak to suck.  After about 3 days of pumping I was pumping about an ounce per session and the nurses were able to ditch the high calorie formula and feed the baby my milk.

I continued the pumping and at about a week old, we tried to latch the baby onto the breast and we shared a magical moment.  He was nursing.  He nursed for about 2 minutes and then tuckered out from exhaustion.

During his stay in the NICU he gained strength and we were able to get him off of the feeding tube and onto a bottle with pumped milk.  At least once a day I would attempt to nurse him, and each time he would nurse for a little bit longer.  I was so proud of him, but we still had a long road ahead.

At 18 days old Mush, came home and we were on a very strict regimen: Nurse, bottle, pump, clean, repeat.  We went for weight checks every 2 days.  I felt like Bill Murray in Groundhog’s Day when he keeps reliving the same day over and over again which becomes his personal hell – it was deja vu, yet it was like a cruel joke.

Baby Mush had reflux and was spitting up my milk.  He wasn’t gaining.  We put him on medication.  We put cereal in his bottle to weigh down the milk.  We brought him to a gastroenterologist to follow his progress.  We started supplementing with the high calorie formula.  After ten straight days he did not gain one ounce and again I heard the words “failure to thrive” and I felt like a failure.

I cried to my lactation consultant, and she hugged me and suggested that I go see someone else.  This was too big for her.

Everyone told me to quit.  Everyone gave me their blessing and told me not to be a martyr.  But I was hopeful.

I followed the advice of the new lactation consultant but there was no improvement, and after two weeks I went back to go see her.  She took one look at me and I bursted into tears.  I was exhausted, I was defeated, and I was broken.

She gave me a big hug, and a big smile, and she said three little words that changed everything: You are successful.

I was so confused.  How could I be successful when I am such a failure…when I can’t feed and nourish and comfort my child the way I was designed to?

I went home and sat down with the baby, the hubby, and my breastfeeding pillow.  I filled my little bottle with milk and I attached the tubes with surgical tape to my breasts and I started nursing.  And I cried my eyes out.  And I looked down at little Mush and I told him that I was sorry I failed him.  And I forgave myself for being a failure.  I took a very deep breath, and I closed my eyes, and I let it go.

And an amazing thing happened….

Now my little Mush is over 12 pounds.  He is 6 months old and we are still trying to make it work.  He still gets supplemented, but I am in a much better place emotionally.  He’s still not yet on the growth charts, but he is the happiest little guy and I am just loving him up.

Last week, after a particularly exhausting day, I had just finished putting Goofball to bed when Mush started to fuss.  I grabbed my breastfeeding pillow, sat down on the couch and latched him on.  He started to nurse and as I watched him I stroked his little head and patted down his few little hairs.  For a quick moment in his sleepy milk-drunkeness, he stopped nursing, flashed a huge smile, and continued on.  I no longer felt like Bill Murray in Groundhog’s Day.  It was my February 3rd.

My little Mush is now 18 months old.  He just weaned.  His last nursing session was over a week ago and the memories of him nursing are mine to treasure.

Jul 26, 2013Jamie
Raise It Up! (from the road)Is Kate's Postpartum Belly Heroic?